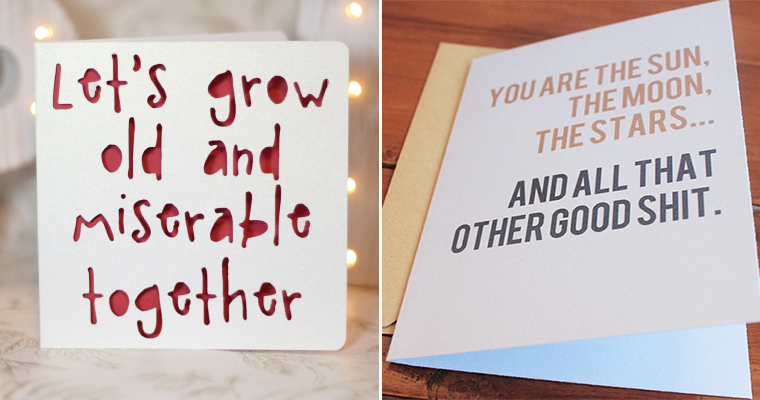 Each Valentine’s Day, you have two choices: you can take the romantic approach, or you can head straight for the funny bone and make them laugh. If the second approach sounds good to you, scroll down to check out 20 funny Valentine’s Day cards guaranteed to get you laid! 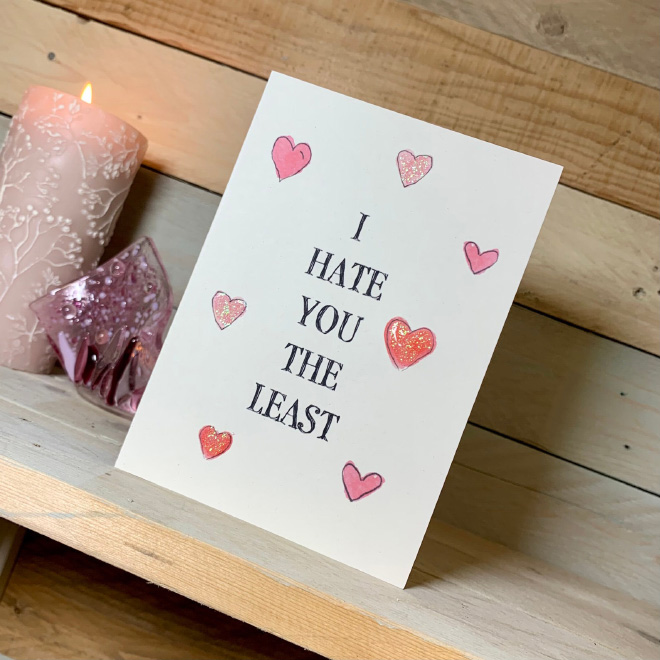 I hate you the least might not sound like the most romantic phrase in the world, but in some relationships, it’s the highest compliment you can give. Think about it, if you truly hate someone, you don’t want to spend any time with them. But if you tell your significant other “I hate you the least,” it means that out of all the people in the world, they’re the one you can tolerate the most. 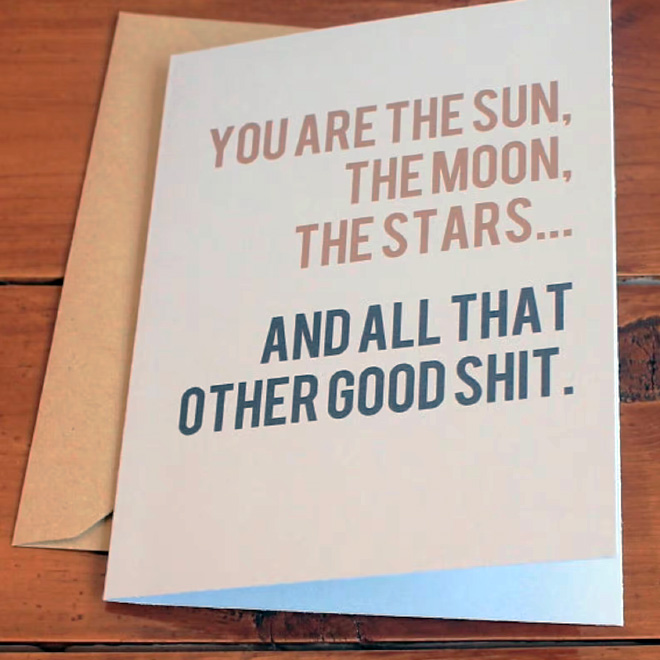 Valentine’s Day is all about showing your significant other how much you care, and what better way to do that than with a thoughtful, personal gift? If your partner is into astronomy, then a Valentine’s Day card with all the good astronomy shit might just be the perfect choice. 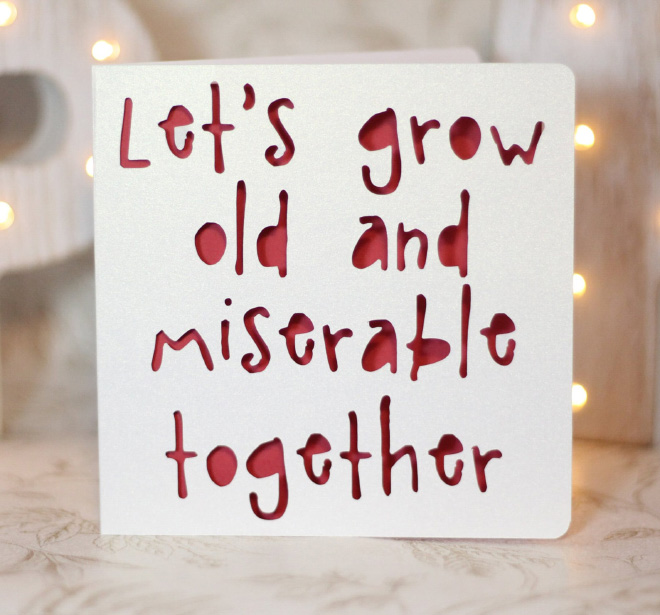 Think about it, when you and your significant other are sitting on the porch, grumbling about how hot it is, or how nothing is as good as it used to be, you’re not just complaining, you’re bonding. You’re sharing in the joys of growing older and all the aches and pains that come with it. It’s very romantic! 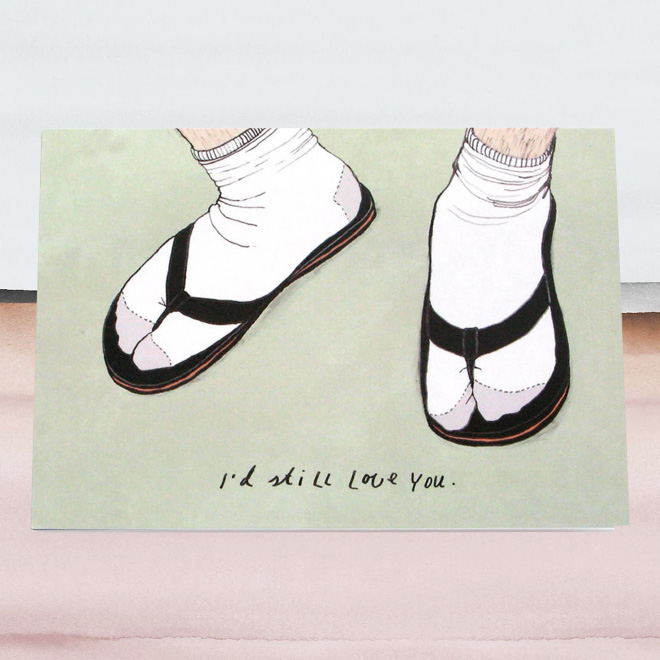 Socks and sandals, the ultimate crime against fashion. It’s like wearing a tuxedo to a beach wedding, it just doesn’t make sense. It’s a fashion faux pas that should be punishable by law. If she still loves you after seeing you do it, marry her! 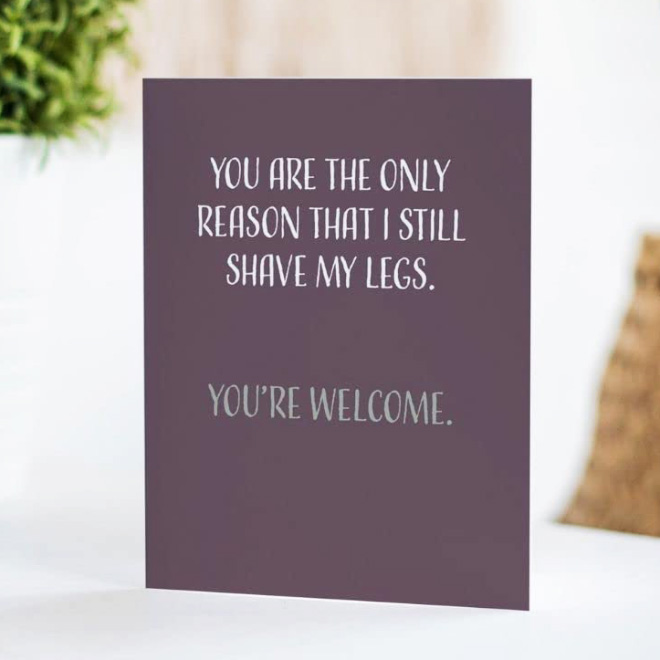 Shaving your legs may not seem like the most romantic gesture in the world, but it’s actually the ultimate expression of love. Think about it, when you take the time to shave your legs, you’re saying to your significant other “I want to be smooth and hairless for you, and only you.” It’s a symbol of devotion and selflessness, like a modern-day knight going into battle with a shiny, hairless armor. 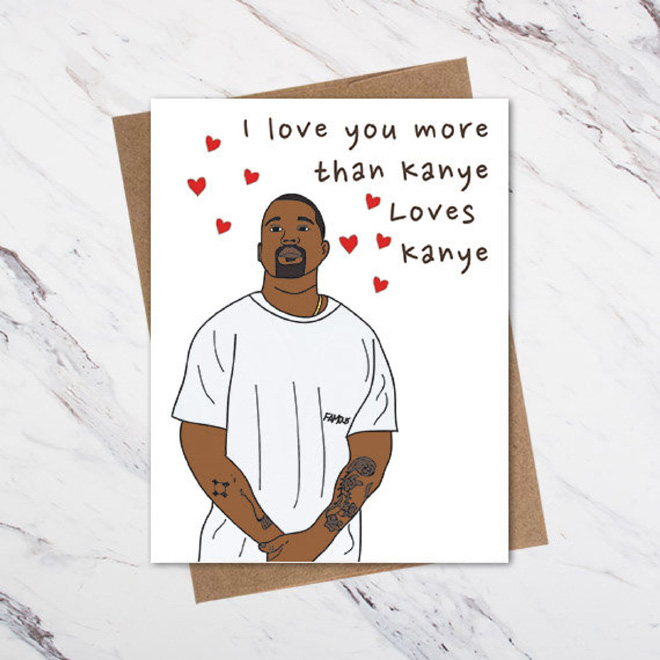 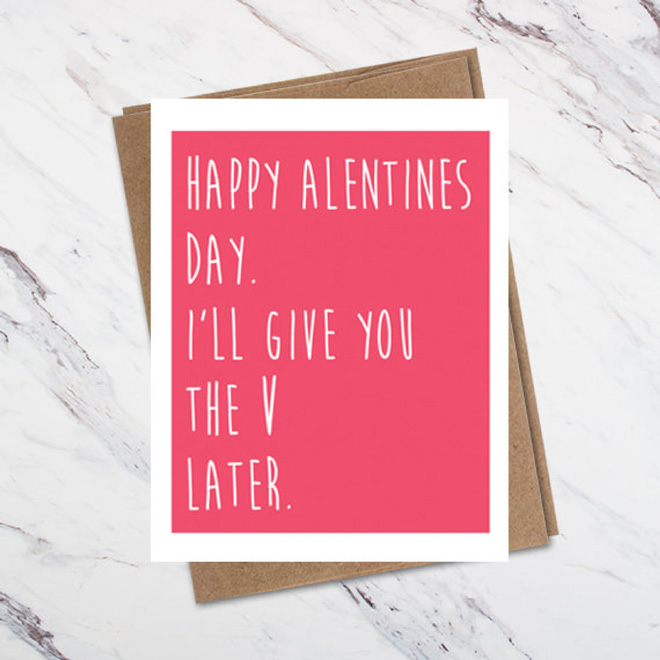 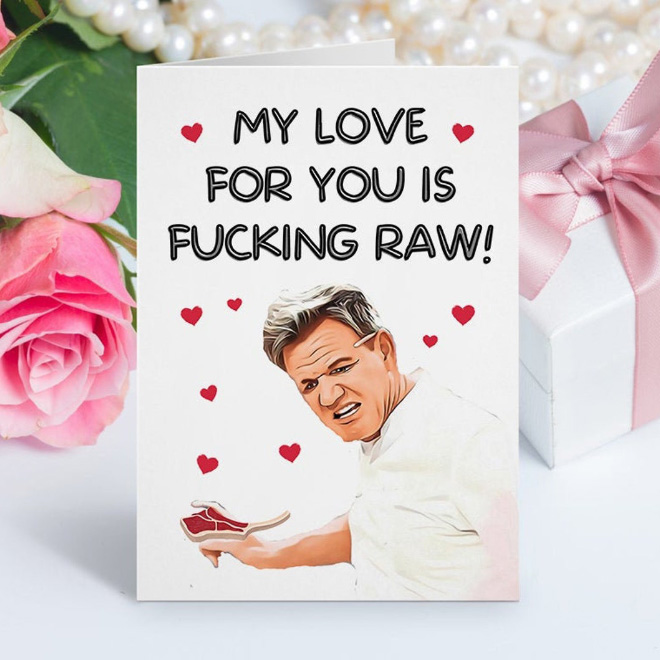 Gordon Ramsay is known for his fiery temper and sharp tongue in the kitchen, but did you know that he’s actually the most polite and soft-spoken celebrity out there? That’s right, beneath all that tough talk and yelling, Gordon is a true gentleman, with impeccable manners and a heart of gold. In fact, his politeness is so off the charts, that it makes him the perfect symbol of love. Gordon Ramsay knows just the right words to say, to make you feel special and loved. 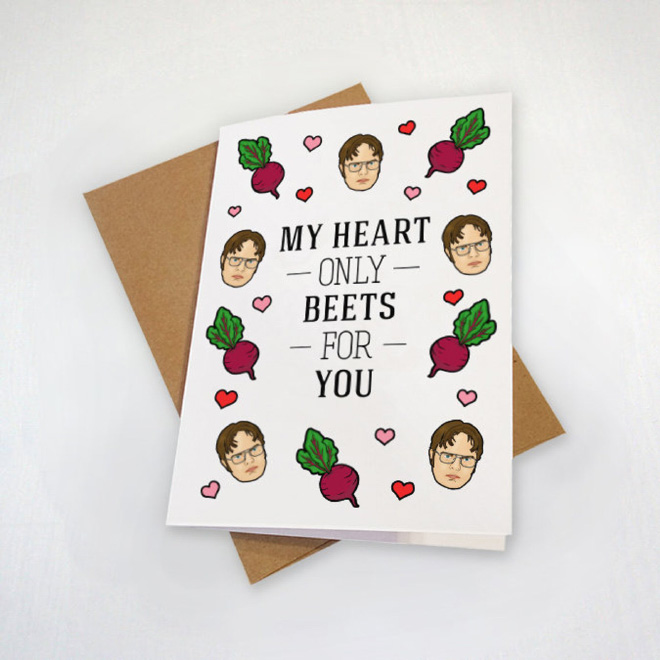 If your partner is obsessed with “The Office” series, then a Valentine’s Day card featuring a related pun from the show might just be the perfect choice. Plus, it will give them an excuse to re-watch their favorite episodes together. So, if you want to make this Valentine’s Day one to remember, skip the chocolates and flowers, and go for the “The Office”-themed card. 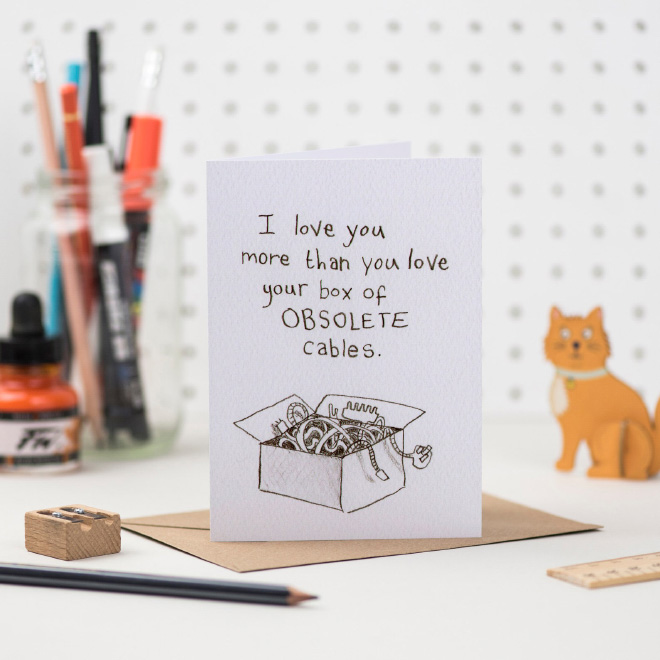 Dating an IT guy can be a challenge, especially when it comes to competing for love with his collection of obsolete cables. They might not look like much, but those tangled bundles of wires hold a special place in his heart, and he’ll go to great lengths to protect them. 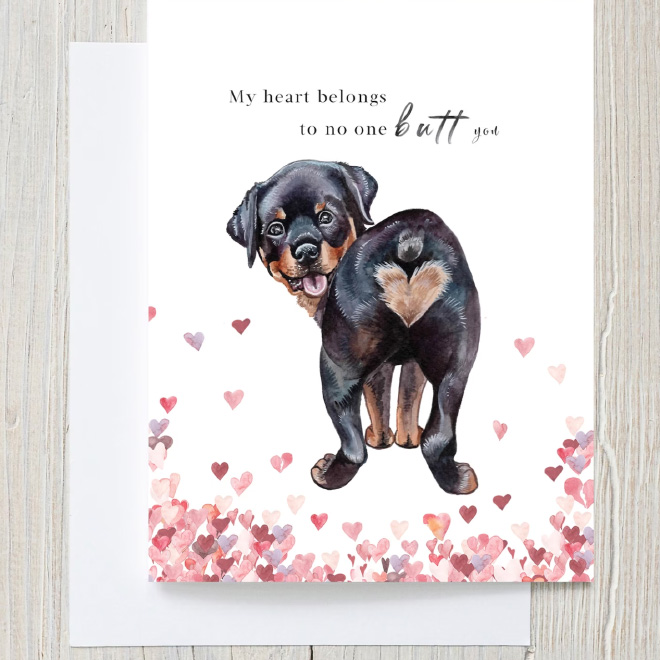 Cute dog picture? Butt puns? This card just has it all! If your significant other can’t appreciate this kind of sophisticated humor, maybe it’s time to split up. 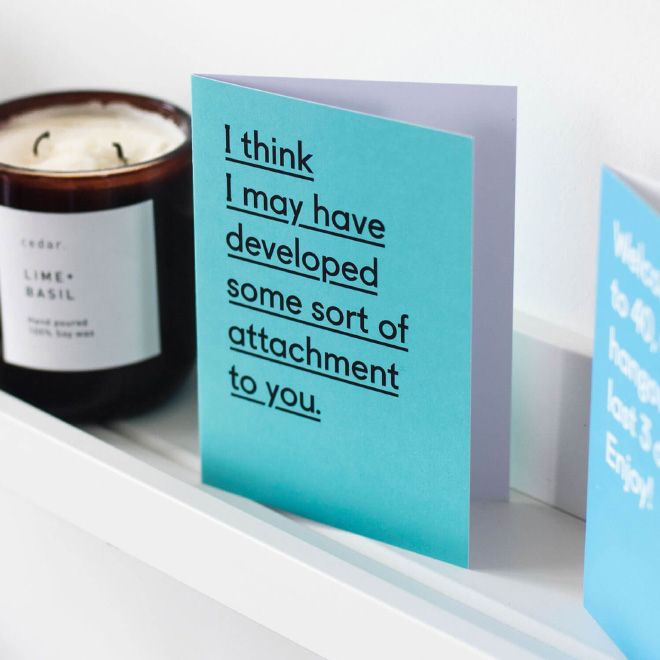 Some kind of attachment is a phrase that implies a deeper level of interest and connection, rather than just a an expression of love. It’s the ultimate compliment! Trust us, we totally know what we are talking about! You girlfriend/boyfriend will be extremely happy to receive this card! 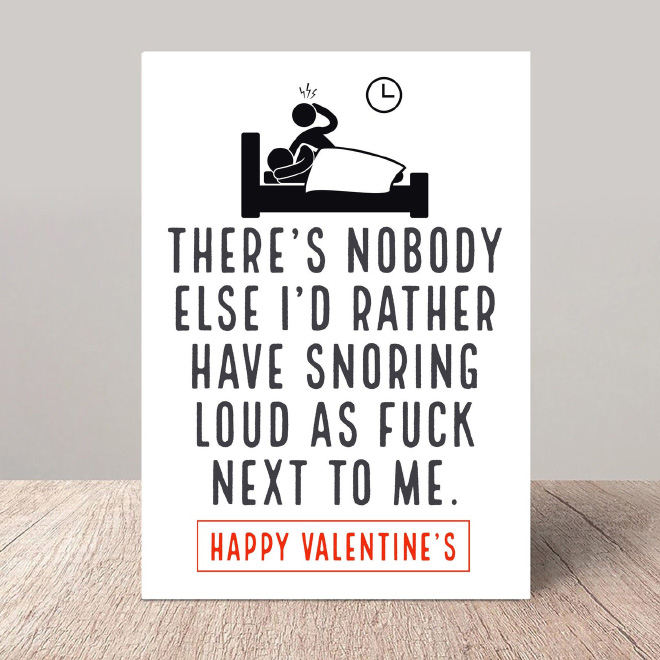 Snoring, the symphony of the night. It’s like a lullaby, but instead of soothing you to sleep, it’s more like a battle cry to wake the dead. It’s like having your own personal soundtrack to your insomnia. If your partner can tolerate it, they really love you. 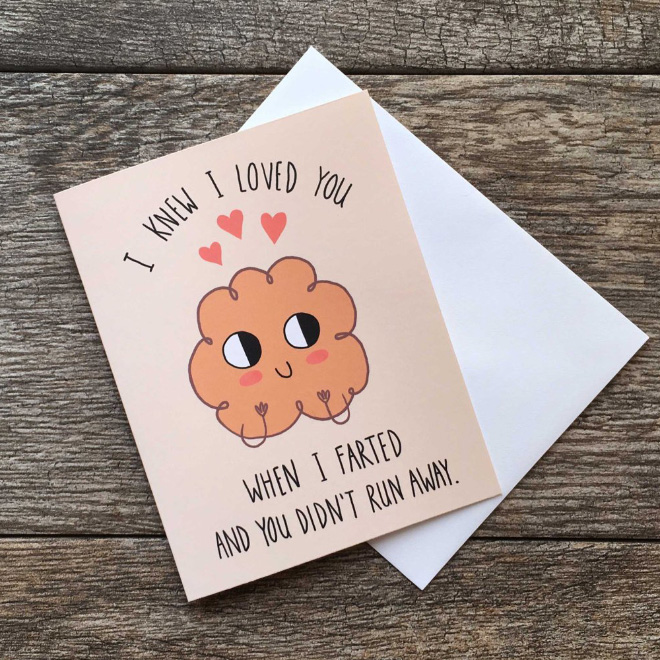 Farting, it’s not the most glamorous of bodily functions, but did you know that it’s actually just your butt blowing kisses to your loved one? That’s right, every time you let one rip, you’re sending a little love message to your significant other. It’s like a secret code between the two of you, a silent way of saying “I love you” without having to actually say it out loud. 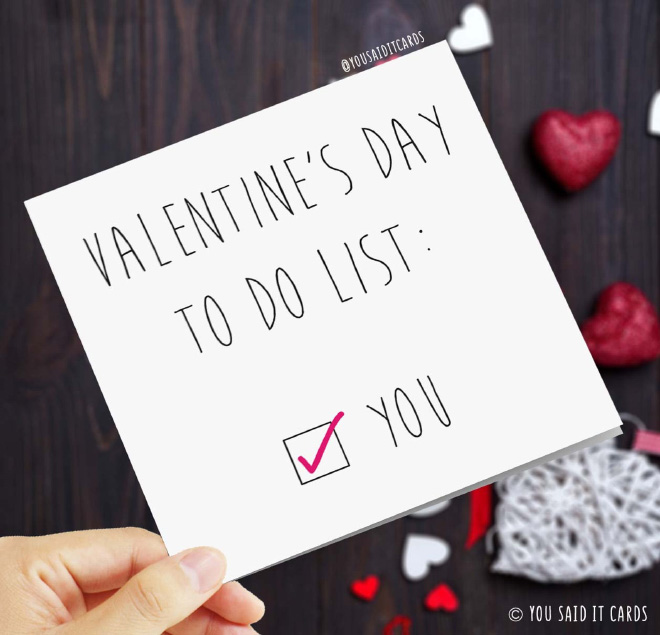 Valentine’s Day is the most romantic day of the year, and with that comes a lot of pressure to make it perfect. From buying the perfect gift, to planning the perfect date, to even having the perfect outfit, it’s easy to get caught up in the frenzy of it all. But the truth is, there’s only one important thing to do – you. 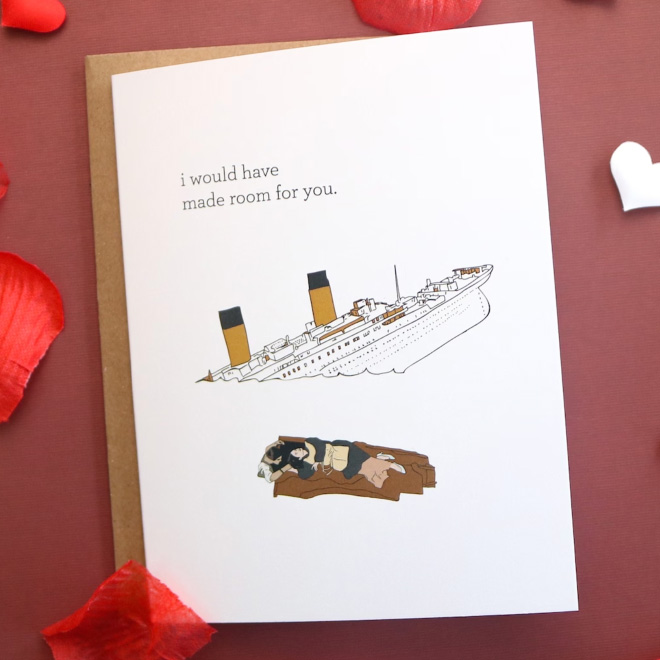 If only Leonardo DiCaprio had known about this, he could have lived and we could have had Jack and Rose 2.0 in our lives forever. Well, probably Rose just didn’t love him enough to make room on the driftwood for him… I, however, would have made room for my significant other. 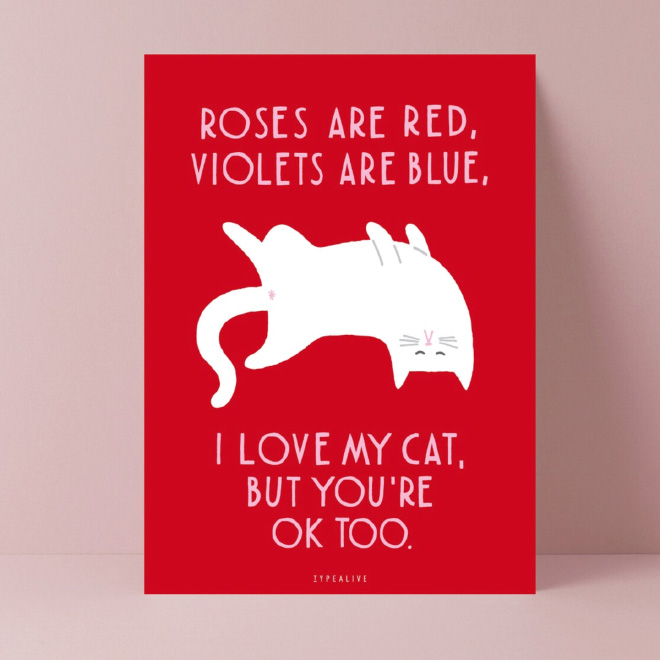 Cat people are a special breed of crazy. They’ll spend hours on end staring at their feline friends, talking to them in baby voices and even creating entire social media accounts dedicated to their fluffy companions. Hopefully, they have a little bit of love for humans left, too. 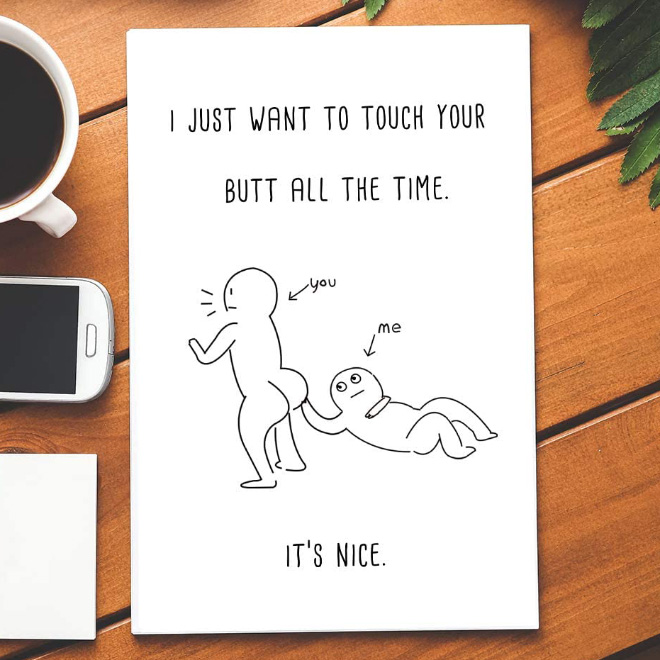 Compliments are important in any relationship, but did you know that the key to a successful partnership might just be compliments about your partner’s butt? That’s right, a little bit of booty praise goes a long way when it comes to keeping the spark alive. 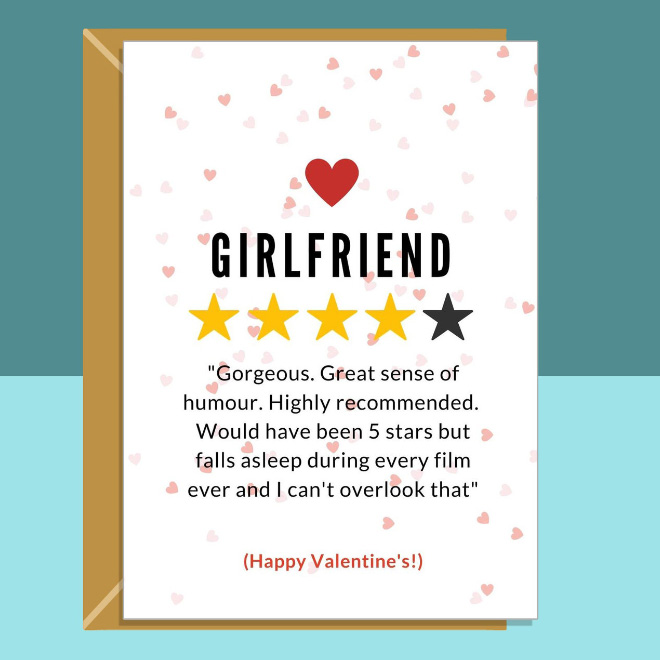 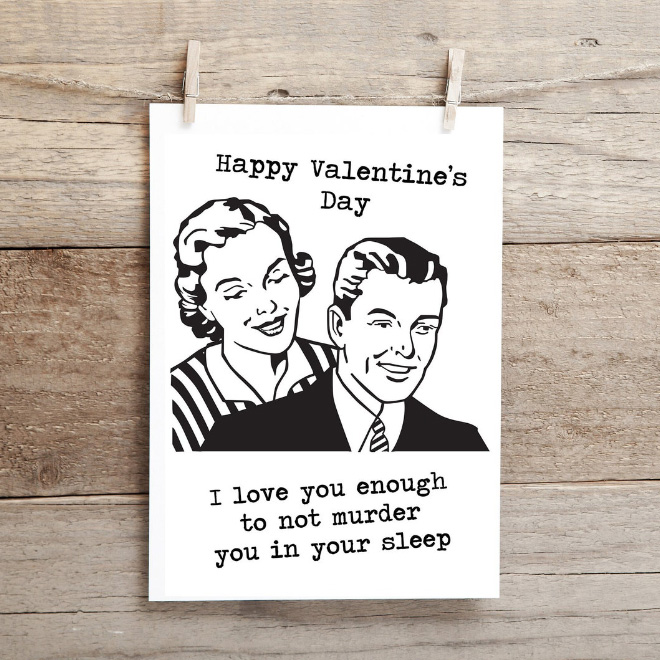 Rejecting murder as a solution to relationship problems is actually a pretty good indicator that you care about your significant other. After all, if you’re willing to forgo the option of homicide in order to resolve conflicts, it shows that you value their life and well-being, which is a pretty big deal in any relationship. It’s like saying “I love you so much, I won’t even kill you when we argue” it’s a pretty strong statement of affection.

Please note that this site is reader-supported. When you buy through links on our site, we may earn an affiliate commission. As an Amazon Associate and Etsy affiliate we earn from qualifying purchases.