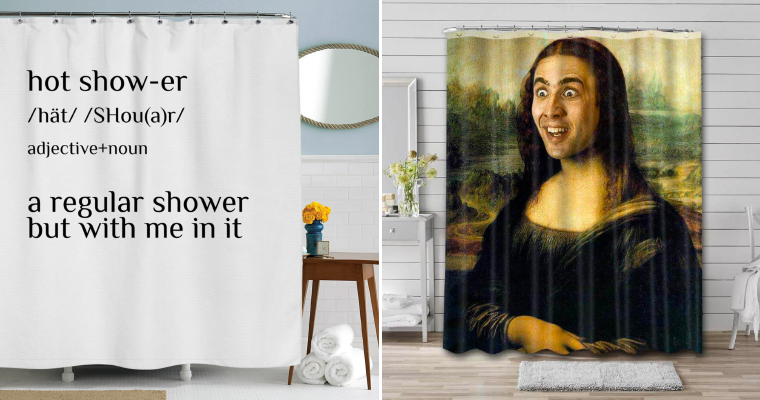 If you’re still using a bland and boring shower curtain, it’s time to level up and join the ranks of the funny shower curtain elite. Not only will it give your bathroom the comedic touch it’s been missing, but it will also make your showering experience a whole lot more enjoyable. Scroll down to see our 20 funniest picks! 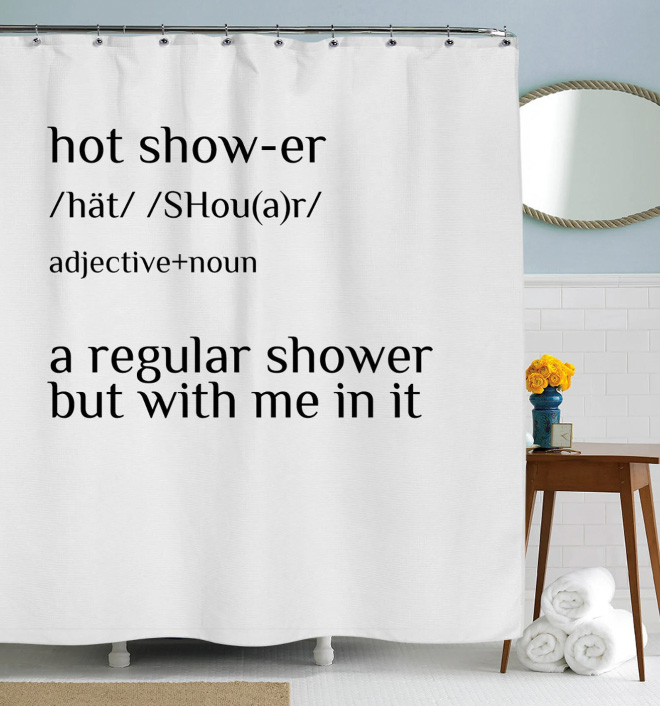 Being extremely sexy is not just a physical attribute, it’s a way of life. You’re the one people notice when you walk into a room and you’re the one they can’t stop thinking about when you leave. You’re the one who makes hearts race and knees weak. Finally, a proper definition! Hot shower is just like a regular shower, but with me in it. 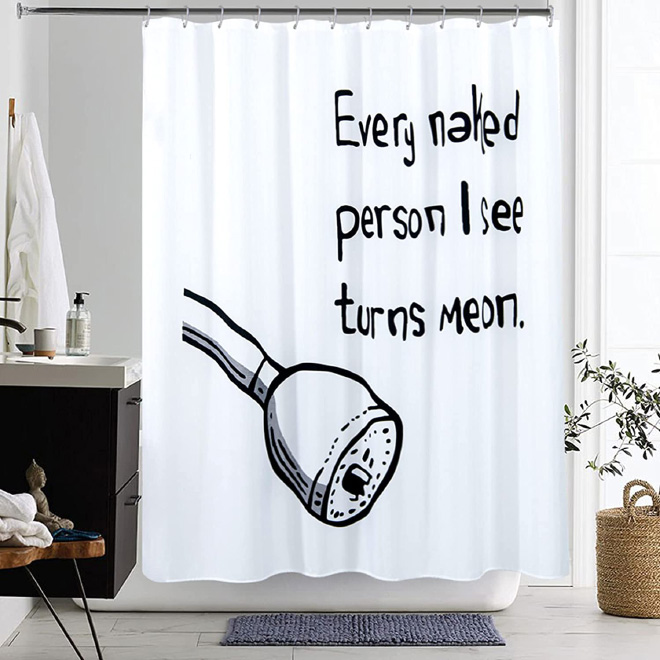 The showerhead has seen it all: the chubby, the skinny, the hairy, the bald. It’s been privy to a whole spectrum of nudity and it’s not shy about it. It’s seen people at their most vulnerable and their most confident. 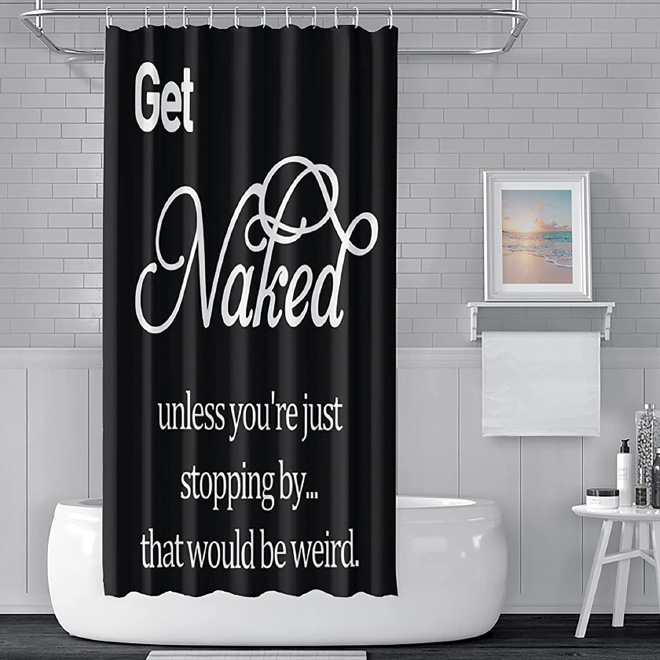 It’s important to have clear rules that are easy to follow. Getting naked without a reason is something that shouldn’t be encouraged. Luckily, there’s a shower curtain to remind you of that. 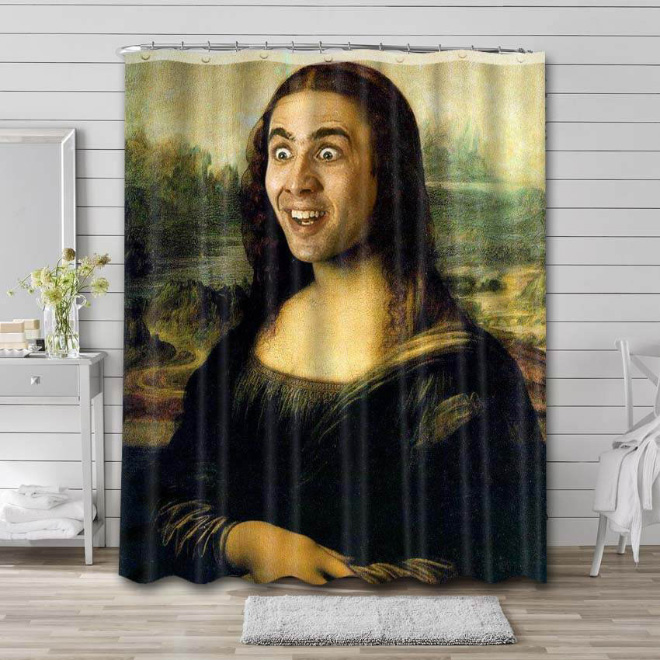 Nicolas Cage as Mona Lisa shower curtain? Why not. If you love random stuff mixed together that make no sense at all, this shower curtain may be the right choice for you. 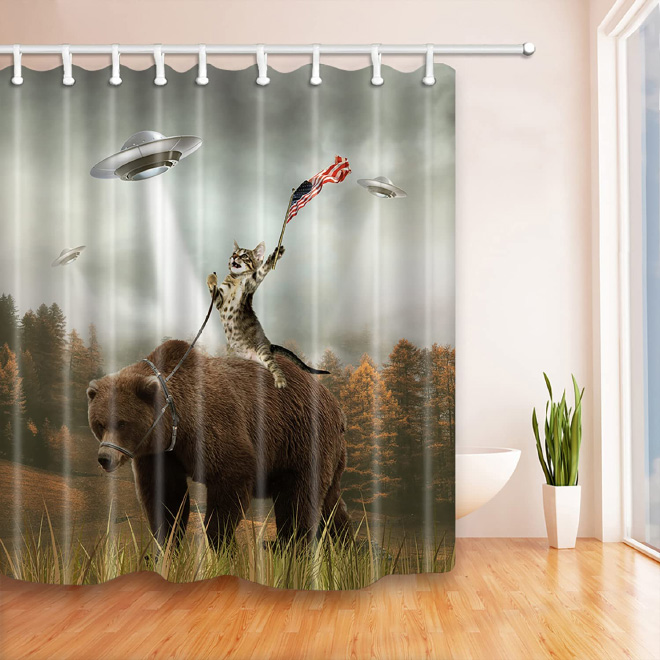 Introducing the ultimate patriotic shower curtain, a masterpiece that will take your breath away and make your heart swell with pride. Behold, a kitten waving a USA flag while riding on the back of a bear. In the background, UFOs can be seen flying in formation, paying their respects to the great American spirit. 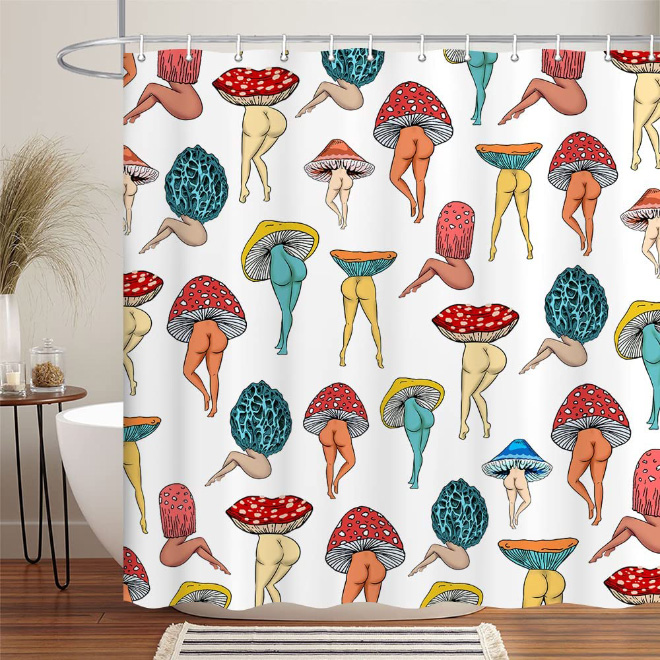 Perfect shower curtain for a mycologist with extremely realistic drawings of mushrooms. We assure you – not a single factual mistake has been made while depicting all these various types of shrooms. 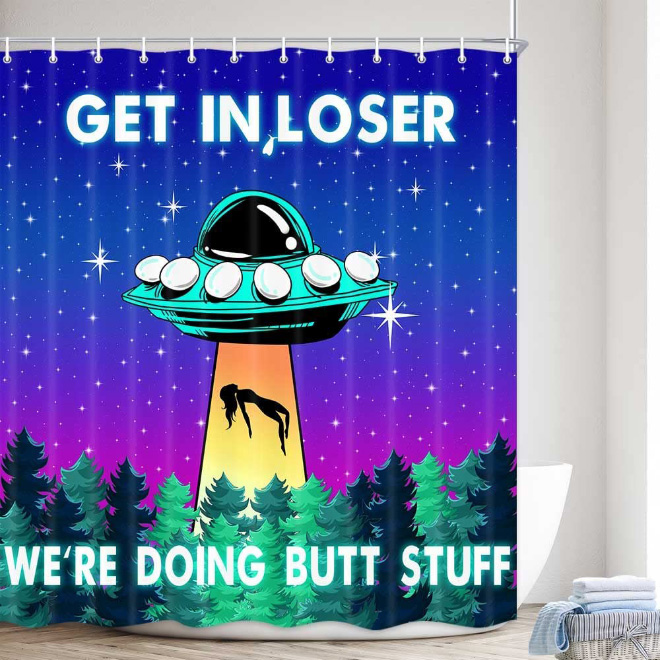 Being probed by aliens may sound like a nightmare to some, but to the true extraterrestrial enthusiasts, it’s the ultimate dream come true. Think about it, you’ll have a front row seat to all the advanced technology they have to offer to invade your butt! Plus, you’ll finally have something truly out of this world to talk about at parties. 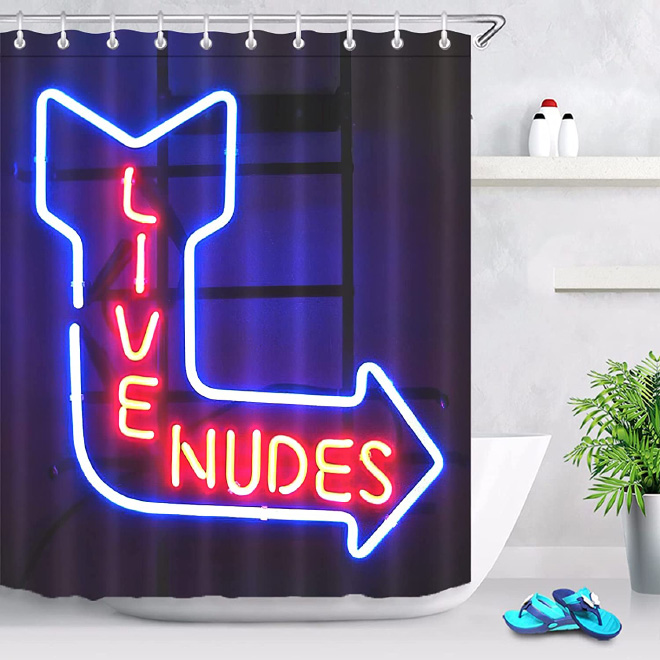 Captain Obvious, known for stating the obvious, would undoubtedly choose the most obvious shower curtain of all time. A shower curtain that simply says “LIVE NUDES” in big bold letters. After all, why beat around the bush when you can spell it out clearly? 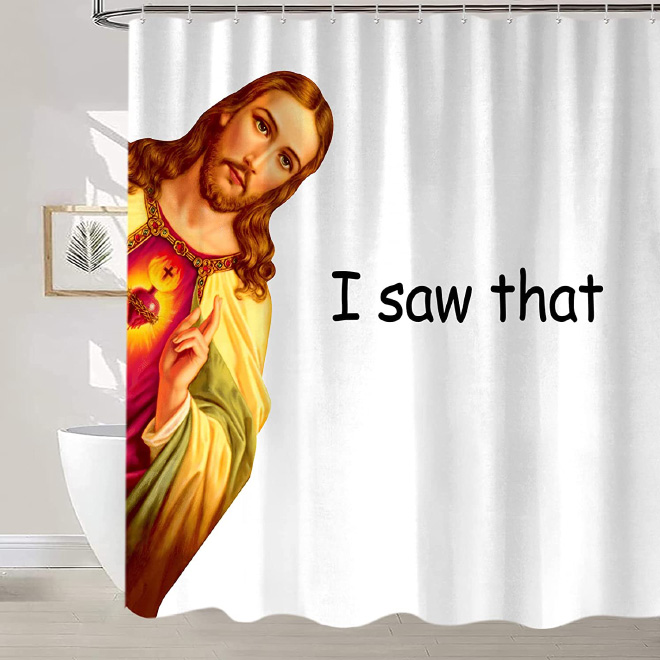 Are you someone who likes to sing in the shower? Well, just remember that Jesus sees everything, even the off-key notes you hit while belting out your favorite tunes. And let’s be real, if Jesus can turn water into wine, he can definitely handle your shower acoustics. But don’t let that stop you from getting your shower concert on, after all, who knows, maybe Jesus has a great sense of humor and is enjoying the show. Just make sure to keep it appropriate, we don’t want to give him any ideas for a new commandment. 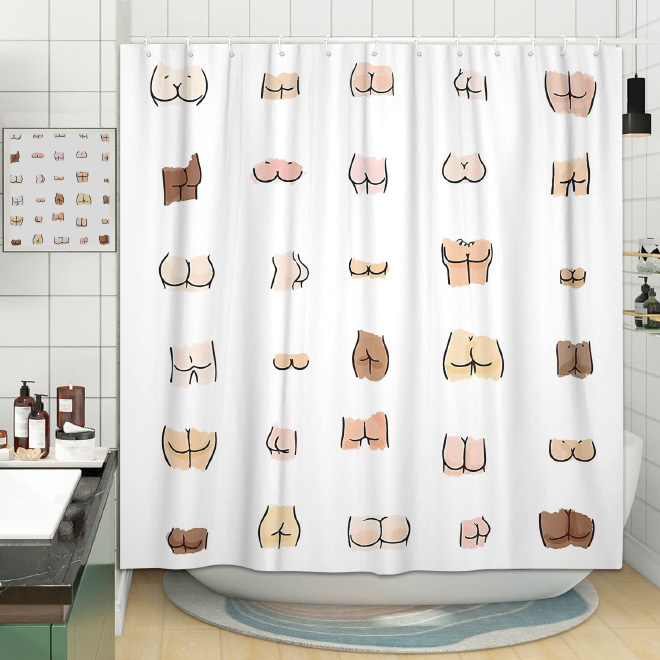 Perfect gift for that someone in your life that’s obsessed with butts. Any shape, any size, any color – loves them all! This one features 30 butts. Yes, we really counted. 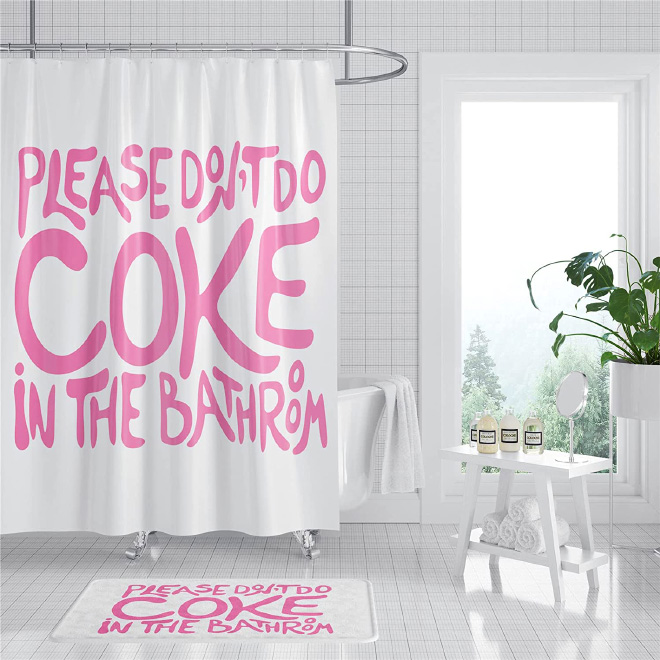 Because let’s face it, the only thing worse than finding someone’s leftover coke residue in your car is finding it in your shower. Just make sure to keep an eye on your guests, you never know who might be tempted to break the rules and snort a line off your shower curtain. 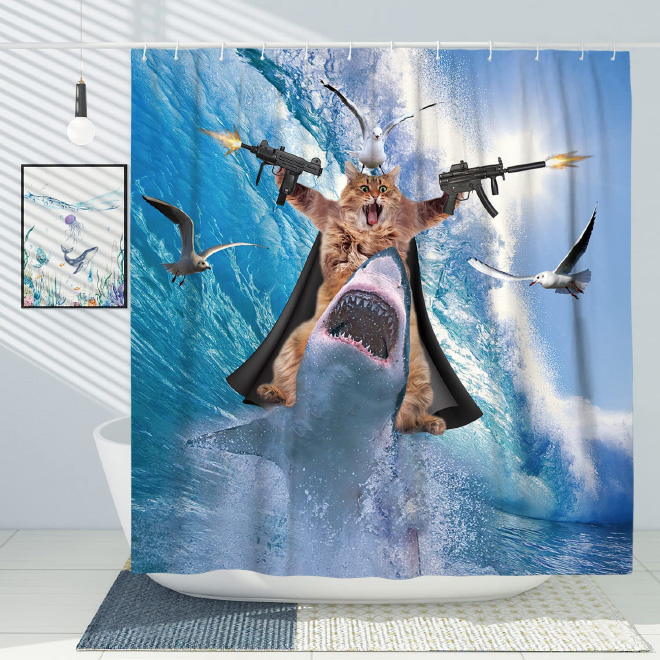 Cat riding a shark while blasting automatic weapons and screaming like crazy? Sounds like the perfect illustration for a shower curtain. Goes very well with any bathroom design and color scheme, and general obsession with cats. 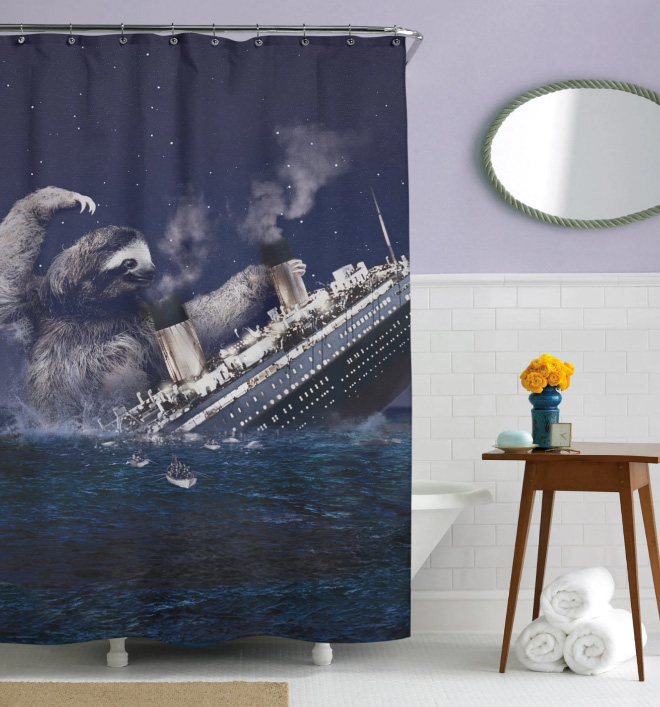 The Titanic, one of the most famous ships in history, was not sunk by an iceberg as we’ve been led to believe. The true cause of the tragedy was a giant sloth. That’s right, a giant sloth. It sounds crazy, but bear with me. This massive creature, who up until then had been living peacefully in the Arctic, was driven out of its home by global warming and in its desperation, it attacked the Titanic. The government, not wanting to admit that they had let global warming get out of hand, covered up the true cause of the disaster and blamed it on an iceberg. But finally the truth is out there! 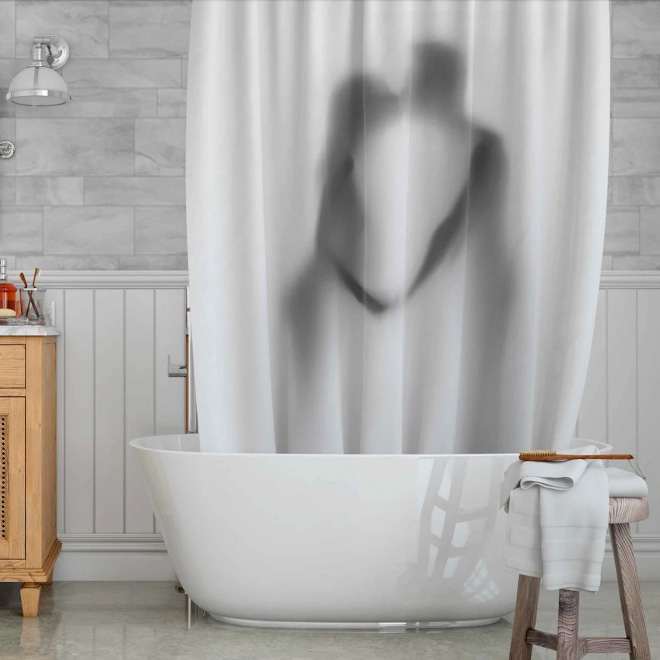 Ahhh… A loving couple kissing is a beautiful thing. However, if they do it in your bathroom and you are 100% sure you live alone with no flatmates, it can get kinda creepy. 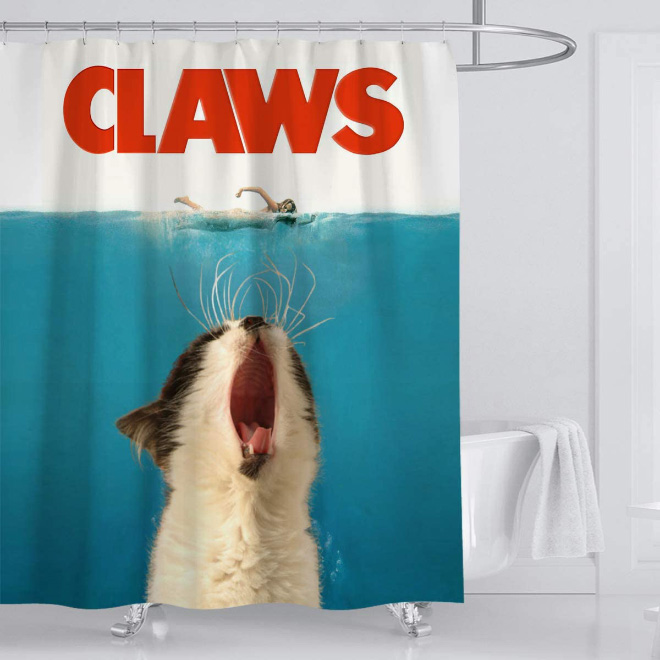 Looking for a housewarming gift for a movie buff? Jaws parody shower curtain might be a pretty good example of both funny and useful gift. 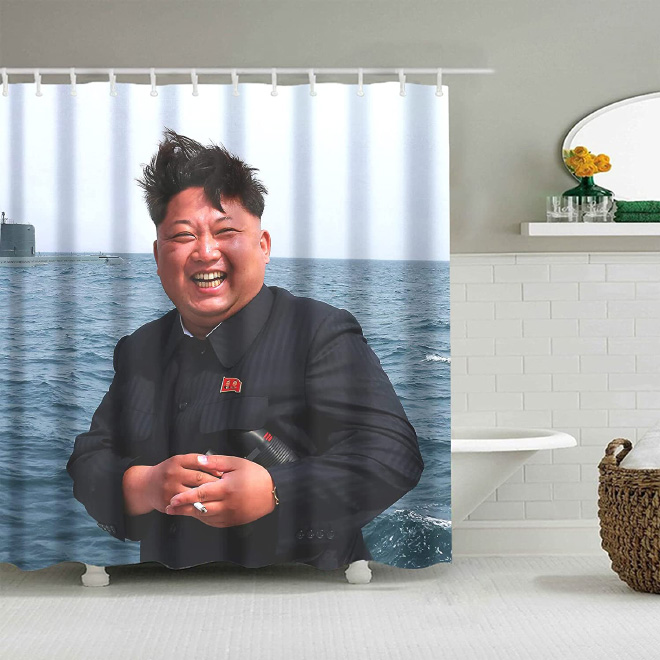 Being the only chubby kid in class is bad enough, but Kim Jong-un is the only fat guy in the whole country. And he smokes! One has to wonder what is he so happy about, considering the prospects of his lifespan. 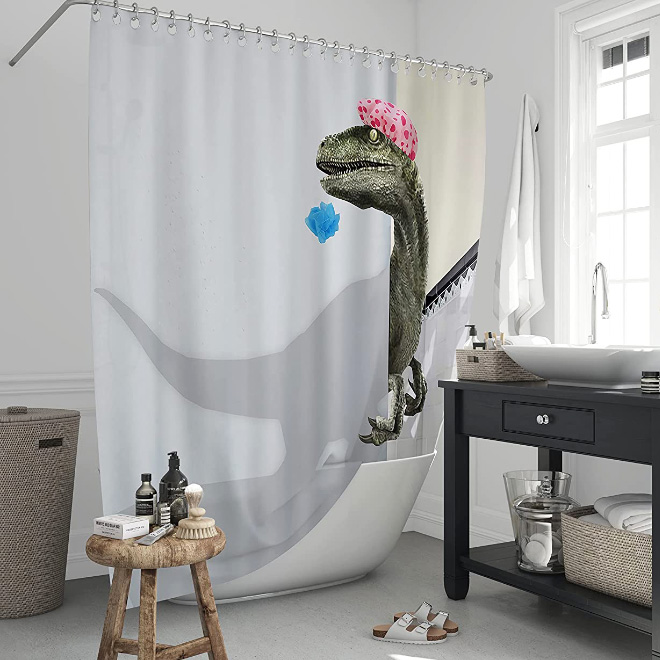 Living with a velociraptor can be quite an adventure, but one thing you learn quickly is that it’s best not to surprise him while he’s in the shower. You see, velociraptors are very sensitive about their personal grooming, and they don’t take kindly to unexpected visitors. Please always knock before entering the bathroom, and make sure to bring him a fresh leafy greens while he showers. It’s the little things that make co-habiting with a dinosaur a little easier. 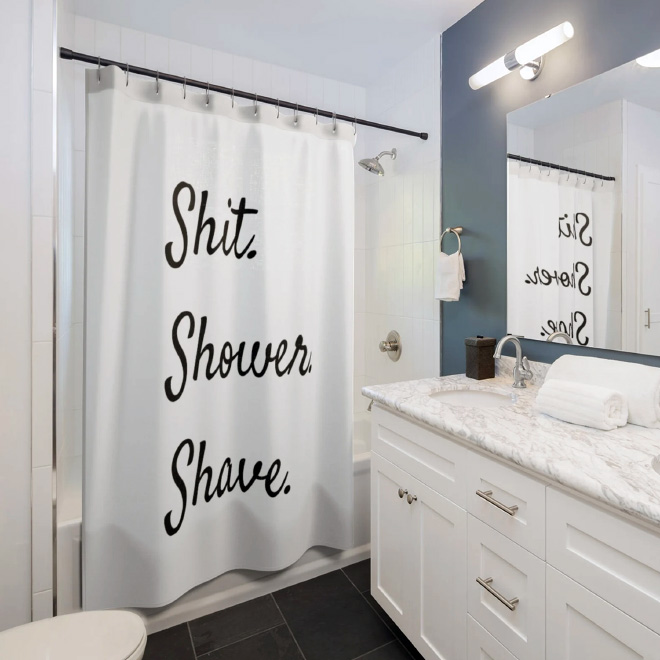 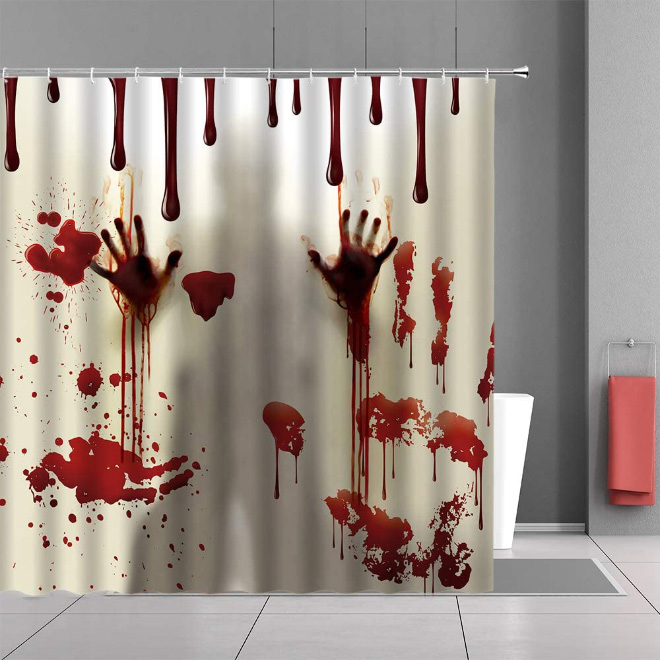 Are you a horror movie fan looking to add some spooky flair to your bathroom? Look no further than our shower curtain with a fake blood splatter design! It’s the perfect way to give your guests a scare when they enter your bathroom. Plus, you’ll never have to worry about cleaning up real blood stains again. 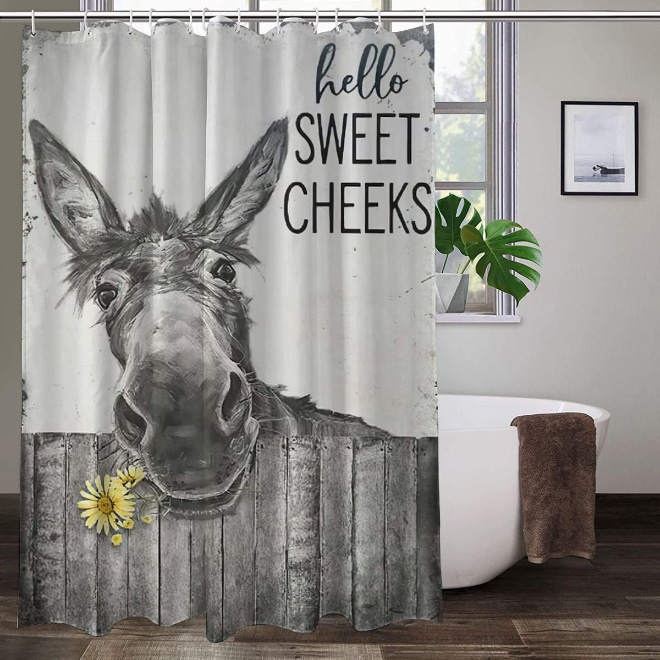 There’s nothing quite like the feeling you get when someone compliments your beautiful cheeks. It’s like a warm hug for your butt! Your cheeks are like the ultimate power duo, always stealing the show and leaving everyone in awe. If they had their own fan club, the bathroom of that club would definitely use this shower curtain.

Please note that this site is reader-supported. When you buy through links on our site, we may earn an affiliate commission. As an Amazon Associate and Etsy affiliate we earn from qualifying purchases.