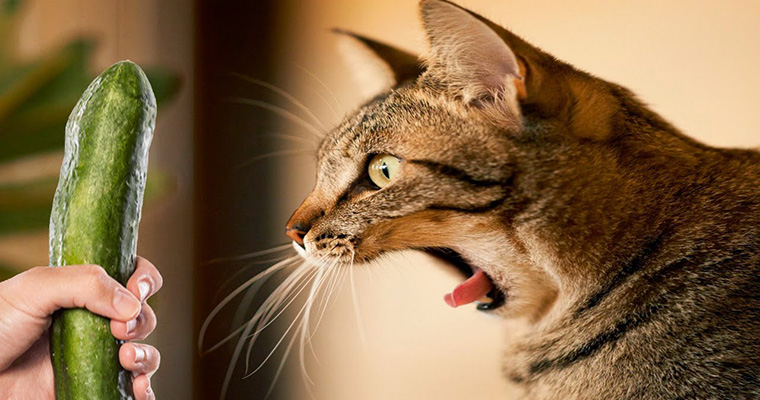 Have you ever wondered why cats are so terrified of cucumbers? Turns out It’s their natural reaction to anything that sneaks up on them without making any noise. Cats tend to be scared or wary of the unknown, as it could represent the danger of a predator, and in the case of a cucumber, a snake. Cats are sharp and alert animals, and as such, they always keep their guard up and have good situational awareness. So, pretty much anything that sneaks up on a cat could potentially terrify it. Only in case of cucumbers it looks funny as hell.

If you take a look at these videos, you might have noticed that cucumbers are deliberately put behind  cats when they are peacefully enjoying a meal with their heads buried in their food bowl. Cats only eat when they are sure that they are not immediately threatened by anything in the vicinity; in other words, cats associate their “food stations” as areas where they are perfectly safe and secure.

As such, when a cat spots a green cucumber lying on the floor behind them, it freaks the cat out because the cat didn’t expect it to be there. Dr Roger Mugford, an animal behaviour specialist says “I think that the reaction is due to the novelty and unexpectedness of finding an unusual object secretly placed while their heads were down in the food bowl.”. Cats wouldn’t normally find cucumbers lying on the floor, so the sheer novelty of the whole thing freaks them out. Pretty much the same way that unexpected things often freak out humans.

If you enjoyed this post, you will also like Melting Cats, Cats That Don’t Want To Cuddle, and Awkwardly Sitting Cats.

18 thoughts on “Why Are Cats So Hilariously Afraid Of Cucumbers?”