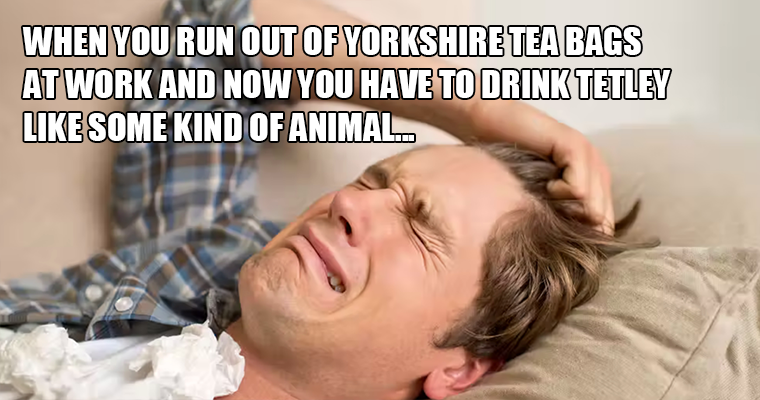 It’s not easy being British. Actually, it’s quite complicated and challenging. The daily struggles of British people are truly enormous. Scroll down to read some of the worst of very British problems!

1. When you run out of Yorkshire tea bags at work and now you have to drink Tetley like some kind of animal.

2. When you are so British you can’t even say thank you. Shopkeeper: “There you go.” Me: “Nice one mate thanks cheers pal have a good day yeah cheers!”

3. Seeing a viral video on social media then seeing the BBC news talk about it 9 days later.

4. The panic of remembering a cup of tea and thinking its gone cold, checking the cup and being relieved that you just forgot that you drank it already, followed by the crippling sadness at the realisation that you don’t have a cup of tea.

5. When you make an eye contact with a stranger on the tube and you both look away out of the window, but your reflections make eye contact.

6. When you order a “Full English Breakfast” and it comes with ONE sausage, ONE rasher of bacon, ONE egg and a F***ING RAMEKIN of beans.

7. The most natural antidepressant you can have, if you are feeling down in the dumps, is to visit Blackpool. You will leave uplifted at the fact that no matter how bad things are, it could be worse. You could live in Blackpool.

8. When you hear someone say “chips and fish” and have to recover for weeks from the discomfort that this phrase inflicted.

9. When you ask a non-British person how their weekend was, and they actually answer instead of saying “Fine, thanks!”

10. Having to add “UK” after searching up a city or county because it comes up with the American place that stole the name.

11. When you are stuck paying £900 per month in rent because the bank says you can’t afford a £450 per month mortgage.

12. When you say “Good morning” to someone at the exact same time as he says it to you, but he said it louder so you aren’t sure whether you need to repeat yourself or whether he heard you the first time, so you decide not to repeat yourself at risk of coming across as rude.

13. Train conductors fall into two categories. 1. Those who shout “Anybody need a ticket?” and not really give a shit. 2. Those who shout “All tickets and passes please!” and scrutinise your ticket like you’re attempting to cross the Korean divide.

15. Video games are never set in the UK because the player couldn’t plausibly keep stumbling upon hoarded assault rifles, pistols, body armour, and ammunition in our tiny houses.

16. When your new kettle is heavier than the previous one, meaning you no longer instinctively know how much water is in it just by lifting it and giving it a little jiggle, so making tea is now much more complicated.

17. When you’re stood at the hot counter in Morrisons for 10 minutes while the 2 ladies have a nice chat. Then you rudely interrupt them to ask who’s working on the counter and they both look at you as if you just asked them to shit inside of the counter.

18. The feeling of utter devastation when you pick up your mug and realise you already finished your tea.

19. Watching any US television show and having to listen to the British person who’s accent sounds like they’ve walked straight out of Buckingham Palace.

20. That sinking feeling when you have zero interest in football but you child is developing a clear passion for it. Oh God, now I’ll have to hang out with football dads…

23. No Tesco I do not want to round up my purchase for charity, maybe you could donate the £825 million profit you made last year instead or the 1 million bonus your CEO got this year.

24. Having to use “color” instead of “colour” when learning HTML and CSS.

27. When your wife calls an ambulance for you and your biggest worries are the state of the kitchen and being unable to offer the paramedics a cup of tea while you are mute and immobile on the floor.

28. Phone the doctors at 8am to get through at 8.03am for them to have no appointments left for today but can offer me next month.

29. Having your non-British colleague telling you it’s time for “a cuppa of tea”.

30. You never know whether to look for “United Kingdom”, “Great Britain”, or “England” on drop down menus.

31. Receiving a letter from the bank saying that the 0.1% interest rate on your savings account is being cut and wondering if you should move your £12.37 somewhere else.

32. Having recently moved to Oxford from the north of Scotland, being told you can’t casually swear during a conversation due to the pub’s no profanity policy.

33. Getting excited when your area is mentioned on the news and then the painful realisation it’s because of a stabbing.

34. It’s cheaper to fly from Newcastle to Manchester via Krakow and back than it is to get a direct train.

35. Being judged for cutting pizza with scissors.

36. Chavs who take their McDonald’s to the cinema and sit on their phones throughout the entire film.

37. Making a cup of tea that’s not quite up to your usual standard, considering abandoning it and starting from scratch, then sadly drinking it anyway.

38. After years of being bombarded with US media, you gave in. You tried making “peanut butter and jelly sandwiches”. It was truly horrific.

39. The monumental stress of needing to accurately kick a ball back to a group of lads whose ball has rolled toward you.

40. Being called “African American” when you’re from Sheffield and have never been to the United States.

41. Coughing constantly on the train because you’re ill, but every now and then muttering “For goodness’ sake!” to let everyone else know you find it bloody irritating as well.

42. The fact that Heinz beans DO NOT stack despite being the most expensive brand!

43. When you are Indian and on the tube. The white guy next to you smells of curry and everyone thinks it’s you.

44. When I was a kid, you could go into the corner shop with £1 and come out with 2 cokes, 3 Freddos and a magazine. Nowadays, CCTV everywhere.

46. When someone says “Monty Python and the Holy Grail” is their favourite movie, you reference it later in the conversation, and they don’t get it.

47. Going for a walk around a forest, seeing a million signs to pick up after your dog, but nothing about the metric tonne of horse shit on the paths.

48. Trying to support local businesses, but struggling because they’re all so rubbish.

49. When you overhead someone saying “Milk goes in the cup before tea.”

50. When you have to choose a language on a website, but it’s represented by US flag.