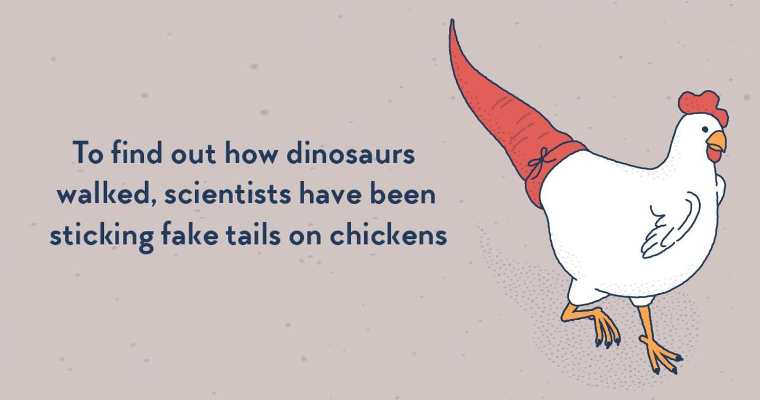 Are you currently bored? This page here will help you out with some interesting but essentially pointless illustrated facts that were created by Ferdio – an infographic agency in Copenhagen, Denmark. Scroll down to see them all! 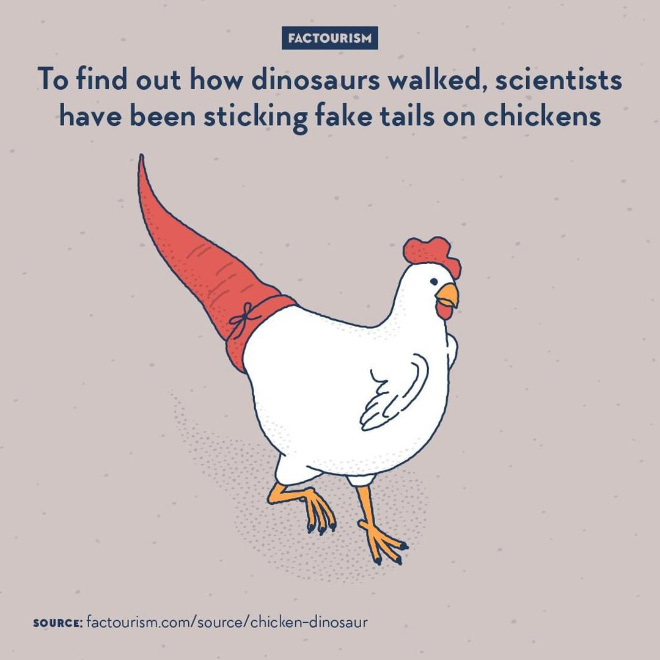 It’s no secret that today’s birds are descendants to what used to be dinosaurs. To study the locomotion of dinosaurs, researchers from the faculty of science of the university of Santiago realised that by moving backwards the centre of gravity of common birds, chickens, from their hatching to their adulthood, they could get the birds to walk more or less like dinosaurs used to. How? By having the chickens wearing artificial tails. 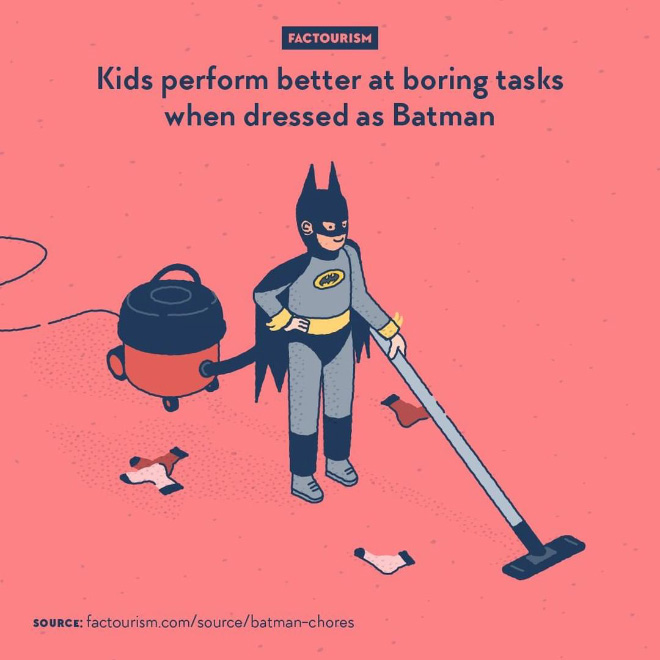 Kids aged four and six were asked to perform a repetitive task, but offered the option to take breaks playing video games instead. No need to say that they didn’t persevere much at the assignment. But across both ages, they did spend more time working in the case they were impersonating Batman. 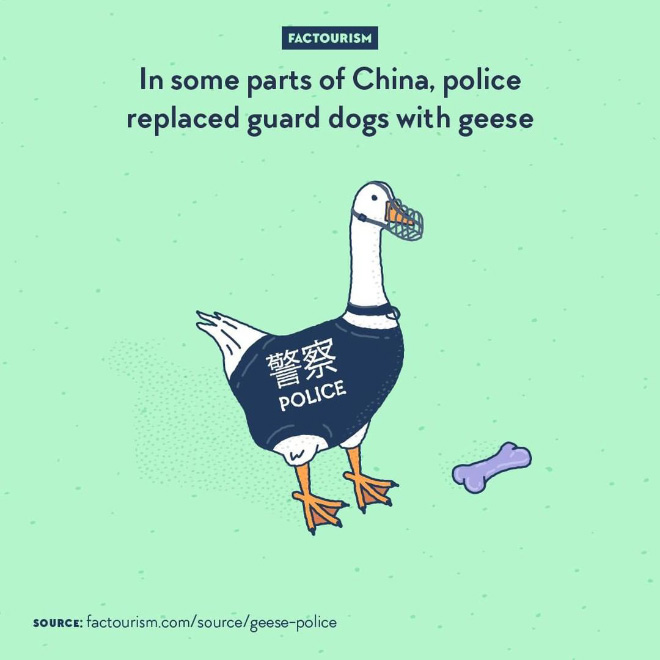 Geese have excellent hearing, exceptional eyesight, are very territorial, aggressive, and loud. For all of these reasons, some police stations in rural parts Xinjiang Province now have geese guarding at night. 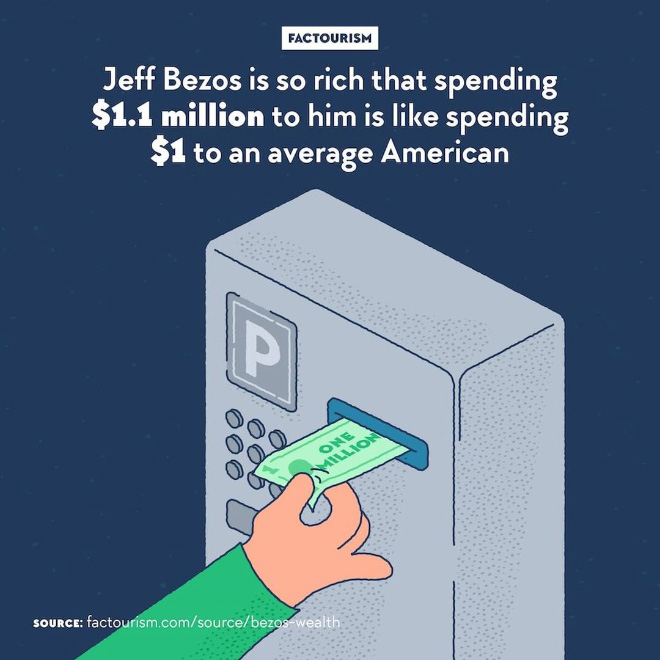 Billionaire Jeff Bezos, entrepreneur behind Amazon and richest person in the world, is worth $110 billion. He earns $2,489 a second. In 15 minutes, he earn as much as what an American with a bachelor’s degree earns in their lifetime. In the meantime, many are the Amazon workers who are edging the threshold of poverty. Bezos is notably using some of his money to launch manned space programmes. 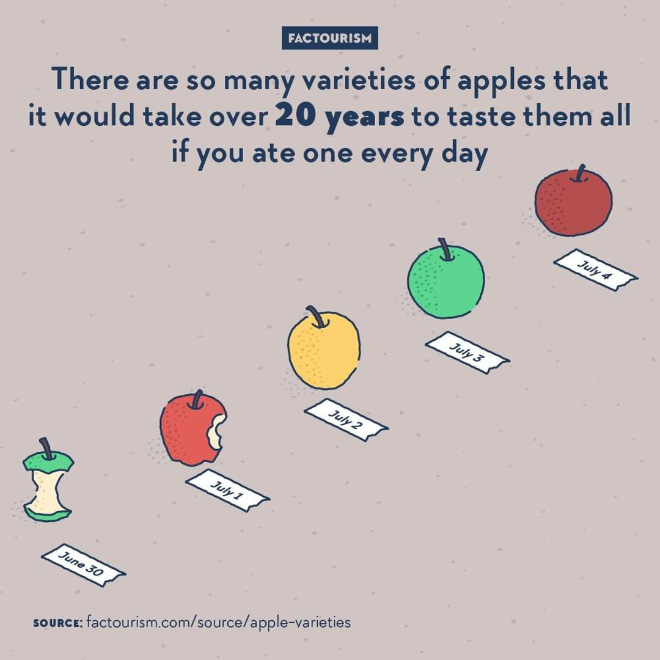 We know more than 7,500 cultivars of apples. Some are good for eating, others are better for cider, jelly, or ornamentation, certain are quite old and not fit for mass production. 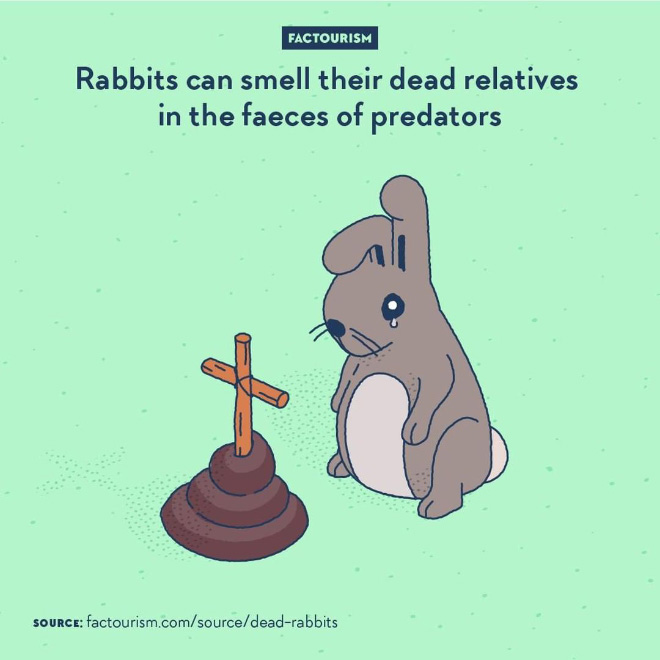 Not only rabbit can recognise the smell of faeces of known predatory species, but it has been found that they are also able to distinguish the ones that has specifically been eating other rabbits. If an area houses an animal a little too fond of eating rabbits in the near past, then it is probably best to avoid this place for a while.⁠ 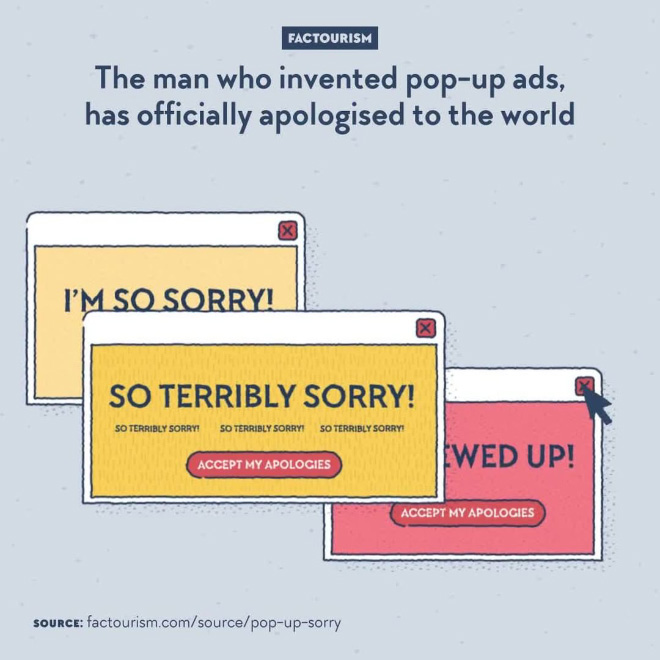 In the nineties, Ethan Zuckerman was working for a website named Tripod. The website was displaying advertising, but the ads were getting in the way of the content and announcers were not always happy with the pages their banners ended up appearing on. When a big car manufacturer was not that keen of having their ad displaying on a page about sodomy the website was hosting, Ethan came up with a solution: a simple piece of code that would open the ad in a separate window. The invention took on, and spread far more than anyone would have wanted, becoming one of the most hated form of online advertisement, and leading browser vendors to implement pop-up blocking features. Ethan finally went public with an apology: “I’m sorry. Our intentions were good”. He believes that “advertising is the original sin of the web” and is now the director of the MIT Center for Civic Media.⁠ 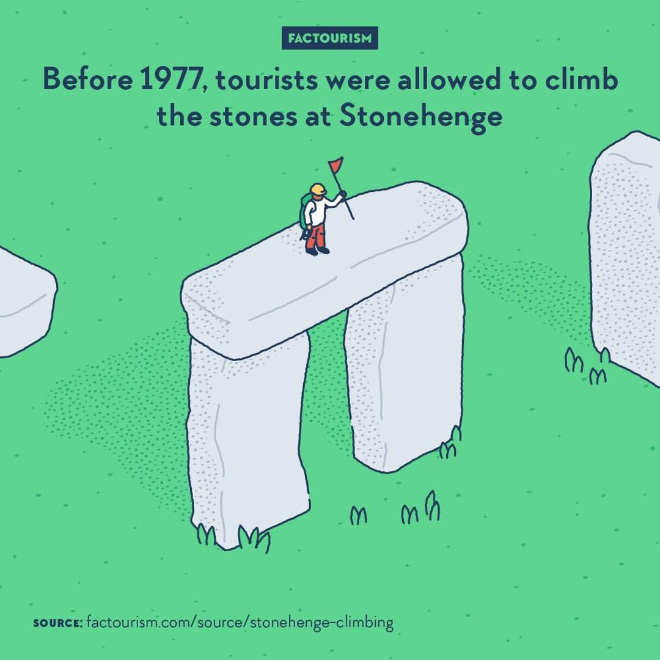 The prehistoric monument of Stonehenge in South West England was built around 5000 to 4000 years ago and believed to have been a burial ground and to have been used for spiritual purposes. It has since become one of the most well-known landmarks, and has been forever attracting visitors. It’s very recently that the site has been protected: the land has had many owners before finally becoming public, buildings – now removed – has been built near to it, people would chisel off bits of rocks to take home as souvenirs, and until 1977 indeed, it was allowed to climb on the rocks.⁠ 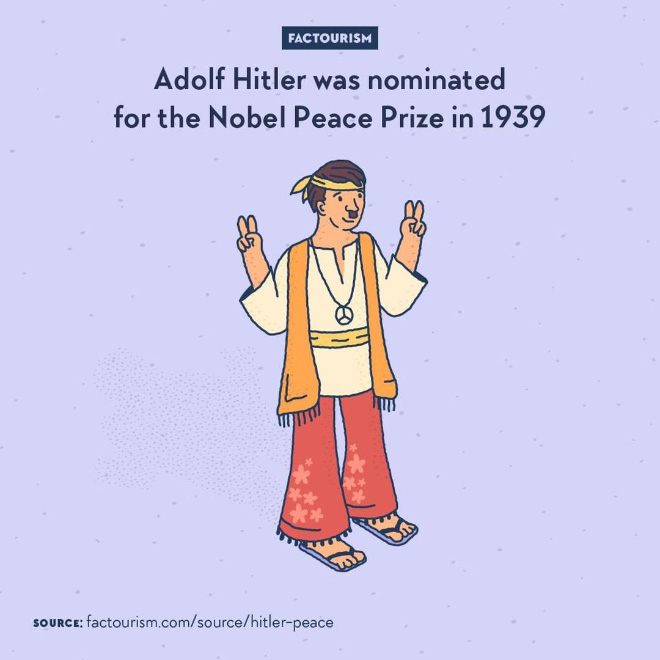 Erik Gottfrid Christian Brandt, an antifascist member of the Swedish parliament, nominated Adolf Hitler as a satirical comment on the nomination of Neville Chamberlain, UK prime minister who had just declared war on Germany. Brandt didn’t mean for his nomination to be taken seriously, and as soon as it was, he sent a letter to withdraw the application. 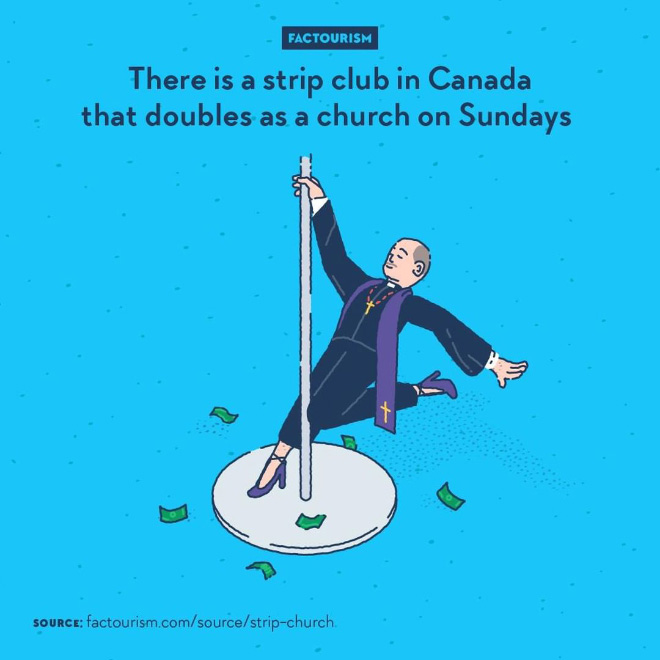 From outside, “the Manor” in Guelph, Ontario could look like any other strip club. But it isn’t: it offers social housing to people who are recovering from addiction, live in poverty, or are just out of prison; its owner has taken the endeavour to help the poor; and a Christian pastor has been hosting a weekly service there for the past six years. 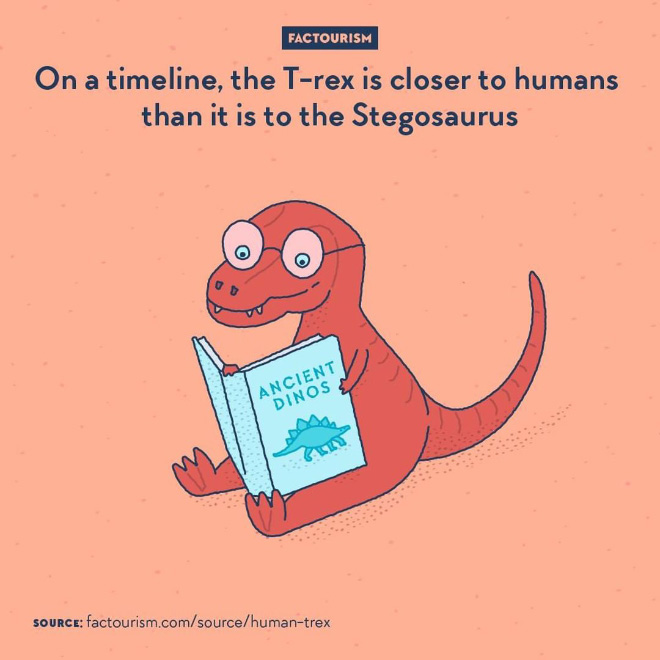 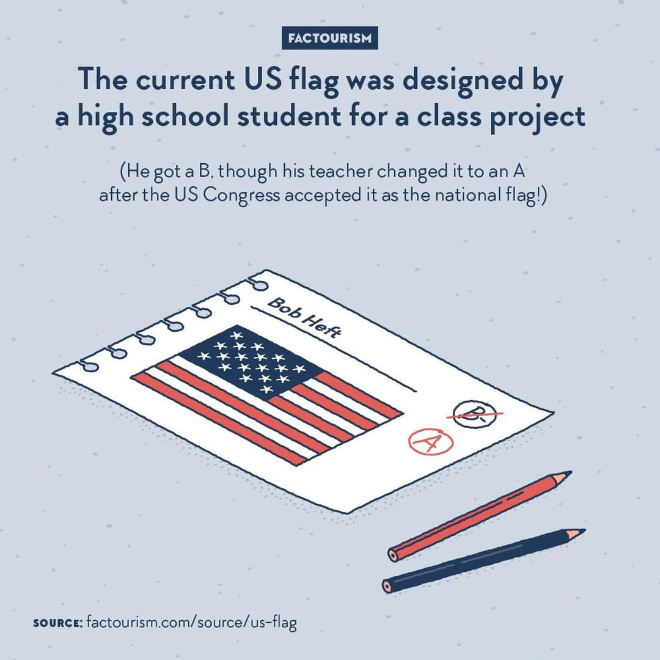 The US flag, stripes and stars, has been having a similar design since the 18th century. But with the number of states changing all the time, the number of stars had to change too. And who says a different number of stars says a different arrangement, so that they all fit satisfyingly in the blue rectangle. With the addition of Alaska and Hawaii in early second half of the 20th century, there was a need for a 50-stars design. The designer of the winning arrangement, 9 lines of alternating 5 and 6 stars, is called Robert Heft and came up with it as part of a school project. He spent a weekend cutting and sewing his flat proposal, which was accepted as an official flag by congressman Walter Moeller and finally adopted in 1960.⁠ 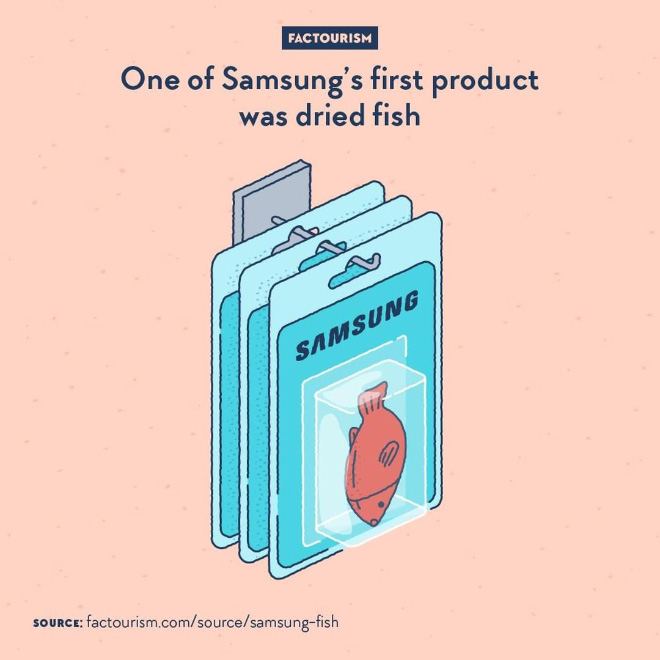 From 1938, when it was founded by Byung-Chull Lee in Taegu, Korea, to 1969, when it started making TV sets, the Samsung company was not dealing with electronics. Instead, it started as a food exporter, shipping products such as dried fish and flour to China, then tried out other activities like life insurance and textiles. 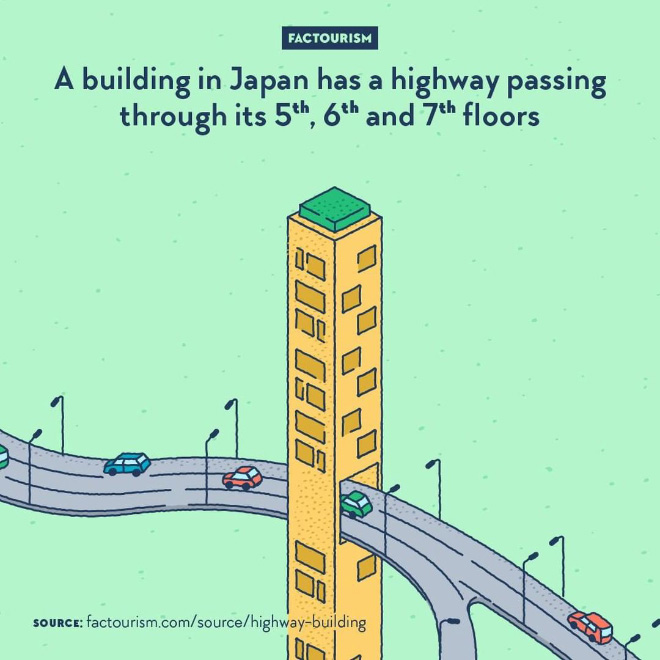 Osaka is home of the Gate Tower Building (Gēto Tawā Biru), a 16-storeys tower opened in 1992 and designed by architects Azusa Sekkei and Yamamoto-Nishihara Kenchiku Sekkei Jimushō. Three of it floors are crossed by a motorway, going through a large hole in the building. The road does not touch the building and is held by a bridge, while the elevator go straight from level 4 to level 8.⁠ 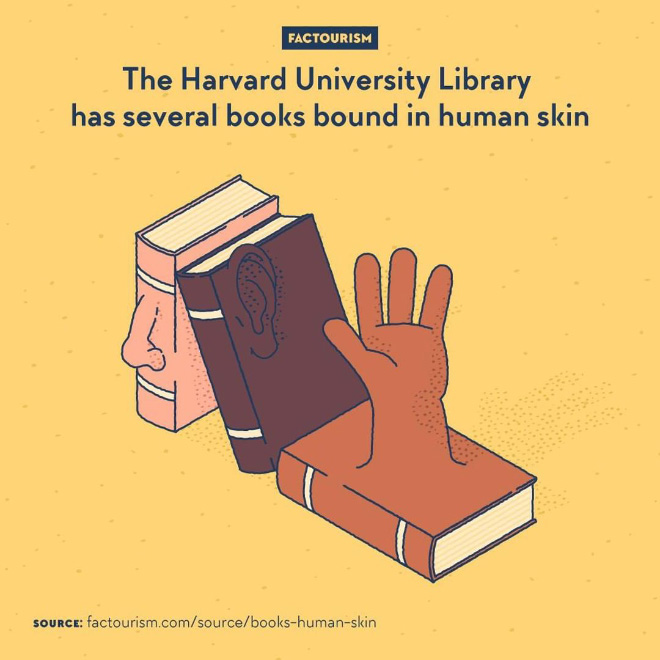 Anthropodermic bibliopegy. That is the proper name for binding books with human leather rather than another animal’s. A morbid practice that was occasionally done in the 19th century and earlier. Some of the resulting books are now conserved in the Harvard Library at Harvard University.⁠ 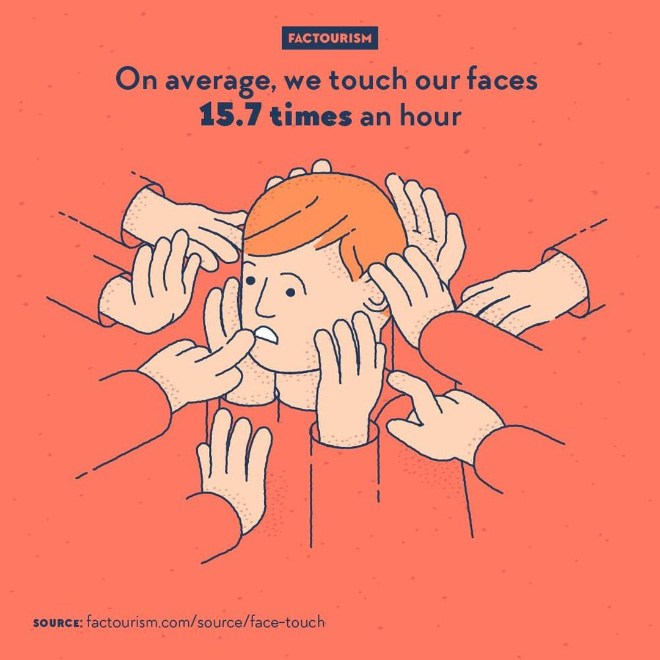 A small study, performed in 2008 in California on ten persons being recorded performing everyday office tasks, showed that they were on average touching their face 15.7 times an hour. If we consider a sleeping time of 8 hours, that’s about 250 times a day during waking hours. 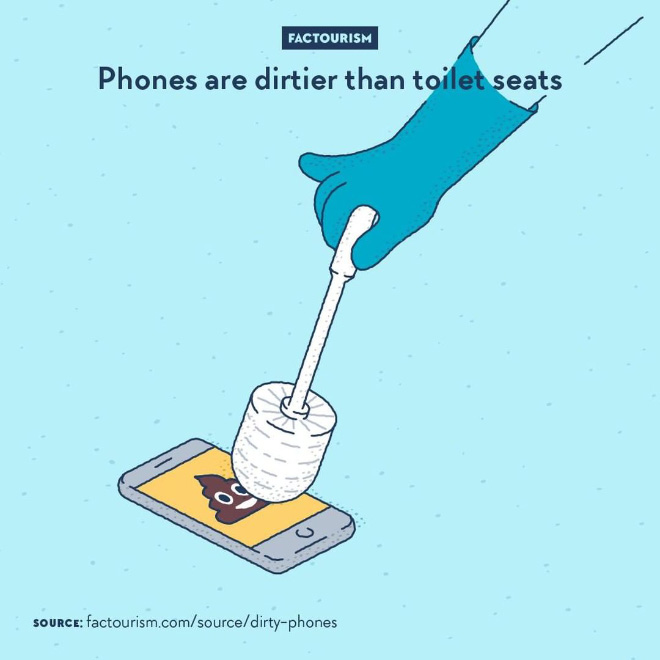 Most people don’t clean their phone and most people touch about 3,000 times a day. That’s a lot less cleaning and a lot more touching than what happens to a toilet seat or flush. A study found a higher amount of bacteria, yeast and mould on phones than on toilets. Keyboards, mice and trackpads are also concerned.⁠ 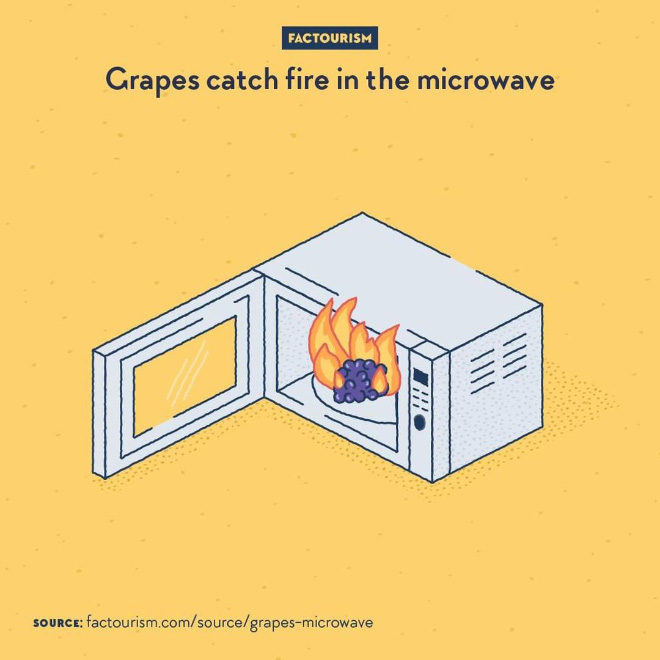 When grapes are put in a microwave oven, especially when cut in two, their shape and material refract the waves in a way that eventually ionise the sodium and potassium content of the fruit and create plasma that ignites and takes fire. 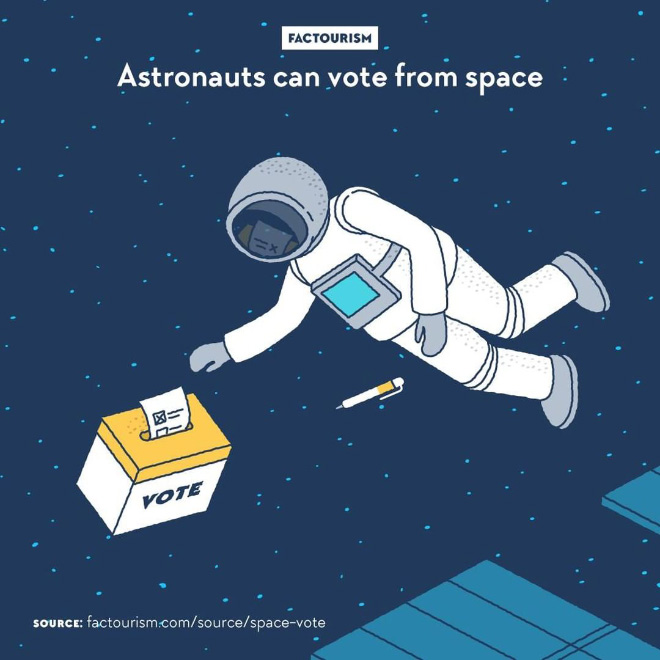 Astronauts aboard the International Space Station, and previously the Mir station, are not exempt of voting duty. They get their ballot as an encrypted PDF in their e-mail inbox, can cast their vote from one of the onboard computers, and send it back to their voting clerk. It initially required some adaptation in the law down back Earth to accommodate for this derogation, but now people in space can voice their political preference almost like anyone else. 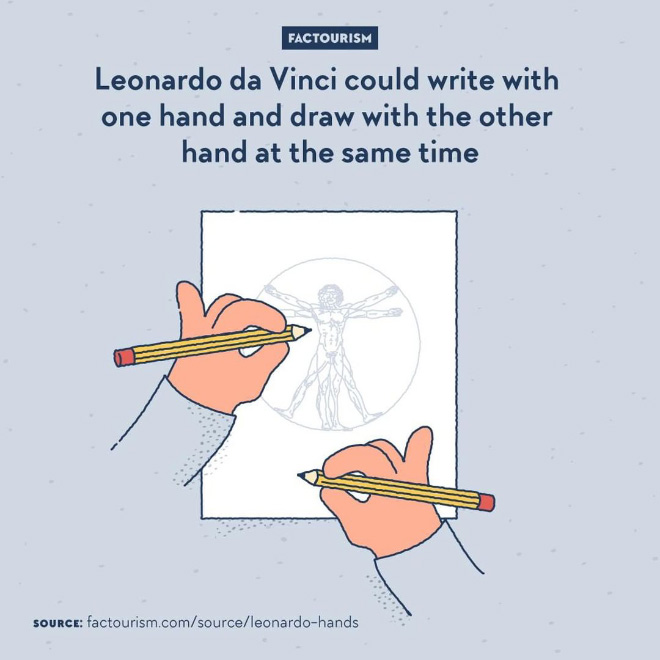 Prolific in sketches and notes-taking, Leonardo da Vinci was ambidextrous. He was able to draw and write (in his infamous backwards script) with both his left and right hands.

13 thoughts on “20 Entertaining Useless Facts To Read While Bored”